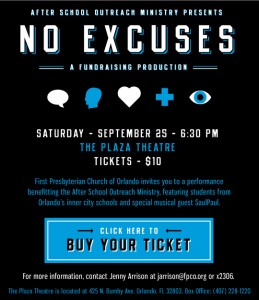 Downtown Orlando is a great place to visit, from it’s upscale dining and steakhouses, movie theater, the new Amway Center, and Lake Eola. It’s also becoming a great place to live as scores of new residents take over the downtown condo’s that have sprouted up the last few years.  Also, a big part of the urban core is the younger generation that can be seen walking to schools, like Howard Middle School, around the same time as the morning commute. A good portion of these kids are from downtown Orlando’s Parammore neighborhood just west of Interstate 4. Unfortunately, many of the families in Parammore currently live in poverty and there are many challenges that this younger generation has to go through on a daily basis from the temptation of drugs, crime, and most importantly, broken relationships.

As part of it’s mission of serving the community, the presbyterian church in downtown Orlando has created the FOUR12 After School Outreach Ministry, a mentoring and tutoring ministry that serves middle school and high school students from Orlando’s inner city schools that focuses on assisting the students with their homework, reading, writing, math skills, playing, and having fun.  The ministry’s daily program is held after school Monday – Friday until 6pm and follows the Orange County Public School calendar. Recently, FOUR12 setup a new Macintosh computer lab that can be seen in the video below:

On Saturday, September 25th, 2010 at 6:30pm, FOUR12 is putting on a show at the Plaza Theatre on Bumby Ave in downtown Orlando called “No Excuses”.

This entry was posted in Life and tagged community service, downtown orlando. Bookmark the permalink.