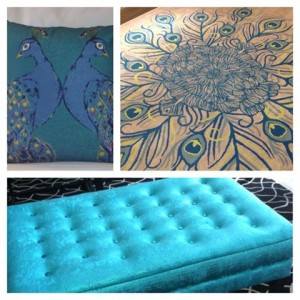 Rollins College debuted its 112-room boutique Alfond Inn hotel in Winter Park to a select few the week before it officially opened on Sunday, August 18th, 2013.

Here is the inside look at the hotel including the rooms, artwork, and the amenities at the hotel that includes peacock-inspired designs that the city of Winter Park is known for.

As expected the hotel features a prominent peacock theme as a nod to its Winter Park location (see photos), but a more surprising touch is a 100-plus piece art collection on display in the public areas of the Inn. The Alfond Collection of Contemporary Art was selected to incorporate into the hotel’s theme of “Language Speaks for Itself”, an idea chosen to support the liberal arts focus of Rollins College. Mediums in the collection include paintings, photographs, sculptures, and alternative visual forms (even a Pan-Am luggage piece).

Once guests have viewed the extensive art collection, there is more to enjoy at the hotel including a rooftop pool, courtyard garden with a cozy fire pit, expansive fitness center, and Hamilton’s Kitchen fine-dinning restaurant.

In May of 2014, the Alfond Inn welcomed new Executive Chef Marc Kusche, who has spent several years as the Executive Chef for several Four Seasons Hotels and Resorts including his most recent stay at the Four Seasons Residence Club Aviara, in Carlsbad, California. See our video below of his introduction and a culinary sampling preview of the menu items that will now be included on the Hamilton’s Kitchen Menu.

This entry was posted in Places and tagged hotels, winter park. Bookmark the permalink.