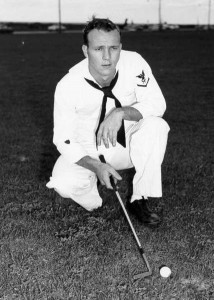 In the early 1960’s, Bay HillClub & Lodge opened in Orlando and held a golf exhibition played by future golf legends Jack Nicklaus and Arnold Palmer. Palmer was so impressed with the course at the time that he bought the course with a group of investors in 1976 and bought his new winter residence at the club just around the same time that Disney World (1971) was getting started. The decision by Palmer to make his new home in Orlando at the time and take on producing the revamped Bay Hill Invitational tournament helped to start the movement of establishing modern day Orlando as one of the golf capitals of the world.

Palmer won 7 majors throughout his career and  peaked during the years between 1960-1963, when he won 29 PGA Tour events in four seasons. In 1960, he won Sports Illustrated magazine’s “Sportsman of the Year” award and in 1967 he became the first person to reach one million dollars in career earnings on the PGA Tour. During this time, Palmer established his strong fan base gaving him the nickname “The King” and his followers that are called “Arnie’s Army”. In 2000, Palmer was ranked the sixth greatest player of all time in Golf Digest magazine’s rankings.

Every year since 1979, Arnold Palmer has hosted Orlando’s main PGA event in the Arnold Palmer Invitational Tournament (formerly Bay Hill Invitational) in the later part of March which has been won in recent years by Ernie Els, Tiger Woods, and Vijay Singh.

In January of 1995, Arnold Palmer founded the Orlando based Golf Channel with Joseph E. Gibbs that is the premier 24/7 golfing channel on cable television.

Arnold Palmer also has licensed his trademark drink of the same name, the Arnold Palmer, a mixing of iced tea and lemonade.

Arnold Palmer had an illustrious golfing career as a PGA Tour Professional and has shown his business intelligence in multiple ventures, but what has made him stand out most as one of the greatest Orlandoans this city has seen has been his initiative to give back to the community. In the 1980’s, Orlando did not have a dedicated children’s hospital to go to. Children needing medical care had to go to small pediatric units inside adult hospitals or out of the area for specialized care. According to a story by the Orlando Sentinel, Orlando Regional Medical Center reached out to Palmer and gave him a tour of their pediatric wing. After completing the tour, Frank Hubbard, a local construction entrepreneur asked Palmer what he thought. Arnold responded, “I think we could do better than this for our kids.”

From there, Palmer was involved with establishing a new hospital for children participating in fundraisers and giving donations of his own. In 1989, Arnold Palmer Hospital for Children opened just south of downtown Orlando. In 2006, Winnie Palmer Hospital for Women & Babies, named after Palmer’s late wife, opened their doors and the two hospitals combined are now ranked as two of the best hospitals in the country.