ArtsFest 2012 Showcases the Best of Orlando’s Art, Theatre, and Cultural Offerings for Free 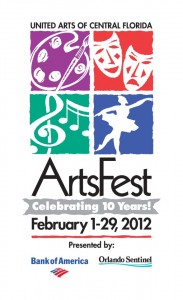 ArtsFest showcases all of the cultural offerings that metro Orlando has to offer as over 100 venues (see Google Map Below) across Orange County, Seminole County, Osceola County, and Lake County showcase more than 220 different events all for free. From events for children like Jack & the Beanstalk at the Pinocchio’s Marionette Theater in Altamonte Springs to Shakespeare’s Cymbeline for adults at the Orlando Shakespeare Theater and the 37th Annual Mount Dora Arts Festival in Mount Dora, there is a little bit of everything to sample and enjoy in Orlando.

On showcase in 2012 at the Bob Carr Theatre is the Orlando Ballet’s Battle of the Sexes III on February 10th, 2012. On Saturday, February 4th, 2012, come watch the Ballet rehearsal of the show. The Annie Russell Theatre at Rollins College in Winter Park presents Picasso at the Lapin Agile and the Mad Cow Theatre in Downtown Orlando showcases Sunday in the Park with George.

Many of the scheduled events for Artsfest are geared towards children with too many to list here. Some of the highlights include pottery, painting, and puppet shows at the Maitland Arts Center and the MicheLee Puppets at the Downtown Orlando Information Center. The Orlando Repertory Theatre will be showing Pinkalicious the Musical and the Russian Ballet of Orlando will be dancing to Sleeping Beauty.

Artsfest is the premier annual event of the United Arts of Central Florida each year. What started out as just a weekend event in 1989 has grown into a month-long event that is held by the participating venues to give back to the different cities and communities of Orlando to help build awareness and support to help the arts flourish in Central Florida. The 2012 ArtsFest event takes place beginning Wednesday, February 1st, 2012 and continues until Wednesday, February 29th, 2012. Check out the Google Map of the 81 venues below from the 2011 event that are also participating in the 2012 event.

Although all events are free, some events are more popular than others and require a ticket to attend. Many of the ticketed events where snatched up quickly in years past so a lottery will be held beginning this year between January 10th, 2012 and January 21st, 2012 that can be accessed here.

During the lottery you can select up to five performances that you would like to see, and enter to win as many as five pairs of tickets. There is a two-ticket limit per show for all “Tickets Are Limited” events. You can return to edit your entry any time between January 10th and the 21st. By January 25th, you will receive an email letting you know if you have won tickets and which “Tickets Are Limited” events they are for.

Click Here to visit the official website of ArtsFest to get all of the information you will need to attend the different events and the history of the event.

Click Here for the ArtsFest schedule. Space is limited for several of the events and will require reservations for attendance.

Google Map of the 2011 ArtsFest Venues