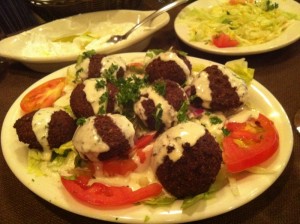 When choosing a great Mediterranean restaurant to dine out at around Orlando, some of the first restaurants that may come to mind are Bosphorus Turkish Cuisine in Winter Park or Cedars Lebanese Cuisine in Dr Phillips. However, if you are living or staying in east Orlando, you don’t need to drive across the city to enjoy great Mediterranean dishes as Falafel Café Lebanese Restaurant and Cypriana Greek Restaurant deliver the goods for those looking to get their fill of gyros, falafel’s, grape leaves, and hummus. 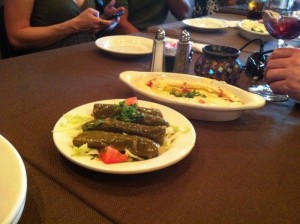 Falafel Café may be the closest restaurant to the main entrance of UCF just outside of the campus and is one of the best restaurants to dine at in the area. Located in a strip plaza behind the Applebee’s, Falafel Café is owned by second-generation restauranteur Aida Boyd, whose Lebanese father operated the Ali Baba restaurant in Seattle, WA for 28 years before retiring. Boyd serves all of the same dishes that her father served including the restaurants namesake of falafel, a mix of soaked chick peas, fava beans, onions, garlic and Lebanese spices that is topped of with tahini sauce and parsley (see picture at top of page).

The grape leaves from Falafel Café are some of the best that I’ve had from any Greek restaurant that are filled with rice, green onions, tomato and parsley, cooked in water & extra virgin olive oil. The Tabbouleh is made with finely chopped parsley, onions, tomato, fresh mint, a touch of white pepper and crushed bulgur mixed with special Lebanese seasoning, olive oil and lemon. The parsley add’s a freshness and nice flavor to both dishes and were some of my favorite’s for my visit. 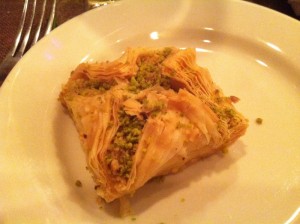 Some of the dinner items at Falafel Café include combinations of beef, chicken, and lamb kabab’s, a rolled cabbage dinner that consist of cabbage leaves filled with seasoned ground beef and rice that is simmered with lemon and spices and a Kibby Dinner that is a Lebanese meat loaf that consists of two layers of ground meat mixed with bulgur wheat, onions and stuffed with ground beef, pine nuts that is then baked and served with hummus and Lebanese yogurt.

On the lunch menu you will find traditional gyros made with seasoned beef and lamb mixed with special spices and grilled on a upright spit. Other items include Basterma, a cured ribeye meat seasoned in American spices and a lunch dish called Holloumi that is thick slices of cheese made from a blend of Sheep and Goat’s milk that is sautéed in a small amount of butter.

For dessert, the baklava is some of the best I’ve had anywhere (see picture above) that consist of a flaky crust with crushed pistachio’s on top. Hookahs are also available to enjoy with your dinner. 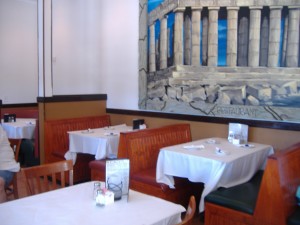 Our other recommendation for best Mediterranean restaurant around UCF and Waterford Lakes is Cypriana Cafe Greek Restaurant on East Colonial Drive about a block away from Congo River Miniature Golf.

This being a second location in the Orlando area for the restaurant, Cypriana is in a free-standing building and is the type of restaurant you might find in Tarpon Springs, Florida with it’s simple interior and quality Greek dishes.  One of my favorite Greek appetizers is Saganaki, also known as the flaming cheese. The waiter will present a type of Greek cheese that is battered & sautéed in olive oil and it is then melted tableside when it is lit on fire and then immediately sprinkled with fresh lemon. 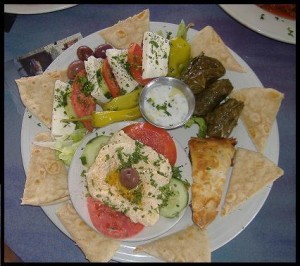 Other Greek dishes include a Greek chef salad topped with gyro meat, a Pastitsio dish that is made with layers of Greek semolina macaroni and meat sauce that is topped with béchamel sauce, and several Grouper and Snapper seafood dishes that are combined with spinach, feta cheese, and mushrooms or with shrimp, scallops, tomatoes, mushrooms, and scallions.

Both recommended restaurants share a number of dishes including Tabouley and Hummus as appetizers and beef, pork, chicken, and lamp kabobs for dinner.

Desserts at Cypriana Cafe include assorted baklava and a baklava cheesecake, a dessert called Galaktoboureko that is semolina custard baked within filo dough and then topped with honey. Rizogalo Greek rice pudding is also available.

Cypriana Cafe also makes our list as a Top 10 Romantic Restaurant around UCF for Valentine’s Day.