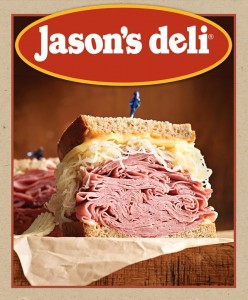 For the last year and half, I have been visiting many restaurants and delicatessens around Orlando searching for the best Reuben sandwich, a hot sandwich made up of corned beef, sauerkraut, Swiss cheese, and a thousand-island type dressing. The sandwich bread is made up of grilled slices of pumpernickel or rye.

From all of my comparison’s, Jason’s Deli comes in as the best corned beef sandwich in Orlando with corned beef piled up with a lot of saurkraut that they call Reuben the Great. Jason’s Deli is a delicatessen out of New Orleans that features a salad bar and free ice cream cone with every meal. 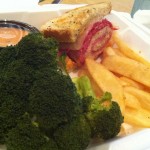 A close followup to Jason’s deli in the Reuben category is Toojay’s Gourmet Deli, a popular Jewish deli out of South Florida with several Orlando locations. With Toojay’s, the corned beef is wrapped within the sourkraut and is piled up.

With Jason’s Deli and Toojays being chain delicatessans, Pickles NY Deli in Longwood is the best independent Orlando restaurant for a Reuben and is different than the other two in that the corn-beef is the consistency of what you would expect with a corned-beef and cabbage St Patrick’s Day dinner.

Jason’s, Toojay’s, and Pickles are all worthy of having the best Reuben’s locally in Orlando. 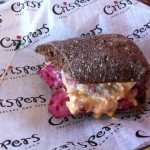 Crisper’s is a delicatessan based out of Lakeland, Florida that was once owned by Publix that has a lot of great sandwiches, flatbreads, and salads. They have a pretty tasty Reuben that I recommend on the menu but it doesn’t compete with the Reuben’s previously mentioned. As with the other local chain’s, Crisper’s has several locations around the Orlando area.

Fiddler’s Green in Winter Park is the best restaurant in Orlando for an Irish dinner and their corned beef sandwich for lunch and Sunday brunch is pretty good as well.

Beefy King has the best roast beef sandwich in Orlando and they have a pretty decent Reuben on the menu as well. You can change it up a little by adding barbecue and horseradish sauce to your sandwich. 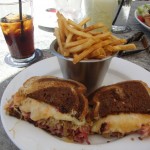 If you are over at the theme parks and want a tasty Reuben, I have found them at the Kitchen restaurant at the Hard Rock Hotel at Universal Orlando and the Wave at the Contemporary Hotel in Disney World. Both sandwiches surprised with the attention to detail, the Hard Rock version on Rye bread. The Kitchen is Hard Rock’s upscale restaurant that is a little more low-key from it’s more well known cafe at Universal Citywalk. 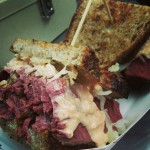 If you are looking for a great Reuben in Orlando at your local Food Truck event, then consider the Reuben being served by the C&S Brisket Bus. Follow their Twitter account here to find out where they will be serving their Reuben that has a very generous portion of corned-beef. 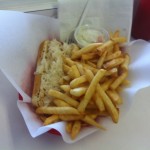 If you are looking for a Reuben but something a little different, then Hot Dog Heaven has a Reuben Hot Dog that you can try, a Vienna beef boiled hot dog on a soft roll with 1000-island dressing, cheese, and sauerkraut.

Being a very casual hot dog eater, I did my best impression of Anthony Burdain and went for it. There were signs on the menu and hanging in the restaurant stating that the restaurant is AAA approved, but I’m not going to lie, my stomach was hurting a little bit the rest of the day. The hot dog was of good quality and had a decent taste after I put a little Gulden’s brown mustard on it, but I will probably stick with ketchup and mustard on my hot dogs from now on and corned beef for my Reuben sandwiches in the future. 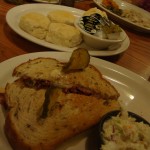 Please post your comments of any other Reubens that you have had around Orlando in the comments section below and see our map of the best Reubens around Orlando.

View Best Reuben Sandwich in Orlando in a larger map