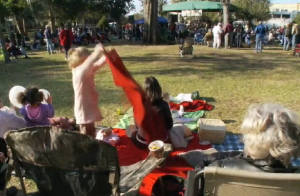 The Bach Festival Society of Winter Park will be presenting a free concert performance in Winter Park’s Central Park on Saturday, February 18th, 2012 that takes the music of Johann Sebastian Bach and performs it with the style of Big Band Swing music for a performance they call Big Band Bach.

The performance will take place in Central Park from 1 PM to 2:30 PM and many of Bach’s most recognized works will be played. The performances are a part of the annual 2012 Bach Festival that contains several performances throughout the month of February. In years past, several of Bach’s works have been played by a 19 member ensemble on stage.

Check out the annual Blues B-Q festival in Downtown Orlando later on that day.

This entry was posted in Events and tagged concerts. Bookmark the permalink.