Why Blake Bortles Should Return to UCF for his Senior Year 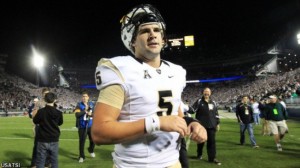 Updated: January 6th, 2014 – Blake Bortles has decided to forgo his senior year at UCF to enter the NFL Draft. Thank you Blake for the most unbelievable season in UCF history. Represent UCF well in the NFL and best of luck to you! Best wishes to starting running back Storm Johnson as well in the NFL!

We also hope to see an NFL team give Jeff Godfrey a chance at the next level as an overall athlete as Godfrey led us to a bowl game victory as a freshman quarterback against Georgia and as a wide receiver against Baylor in the Fiesta Bowl. Go Knights!

Below is our original article:

It has been well documented already why Blake Bortles should head to the NFL. Here are a few reasons he should return to UCF for his senior year:

Disclaimer that this article was written from a purely selfish standpoint from a long-time UCF season ticket holder and fan. Go Knights!

Who is Blake Bortles Video from ESPN

This entry was posted in News and tagged sports, ucf. Bookmark the permalink.