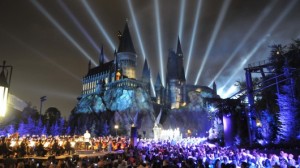 A Celebration of Harry Potter returns to Universal Orlando on Friday, January 28th, 2016 through January 31st, 2016 that celebrates all things Harry Potter with the movie stars of the films making appearances.

A Celebration of Harry Potter

In addition to the appearance by actors from the films, there will also be several exhibits within an expo including:

Harry Potter™ The Exhibition – At the beginning of each school year the Sorting Hat™ places new Hogwarts™ students into a house, and now you too have the opportunity to get sorted into a Great Hall setting inspired by the blockbuster touring exhibition. Step inside the Expo and the red carpet is rolled out welcoming you to an area celebrating to the global impact Harry Potter™: The Exhibition has had during its 7-year 12-city tour, including an exclusive Quidditch inspired photo opportunity.

Pottermore from J.K. Rowling – Pottermore is the digital heart of J.K. Rowling’s Wizarding World. It’s a place to be entertained, to imagine more and discover more. It’s packed with features, articles – and occasional surprises – inspired by the stories that started it all and there’s exciting news from the wider Wizarding World too. And if discovering more about this magical universe excites you, Pottermore has a surprise in store for fans attending this year’s A Celebration of Harry Potter™.

MinaLima – Graphic designers Miraphora Mina and Eduardo Lima worked for ten years on the Harry Potter™ films, creating countless unforgettable graphic props, some of which will be on display including iconic pieces such as The Marauder’s Map, Daily Prophet™ and Hogwarts™ school books. Since working on the films, they created the Minalima Store selling authentic reproductions of the film artwork with limited edition art prints and stationery. They are currently in production on the new feature film Fantastic Beasts and Where to Find Them.

Warner Bros. Studio Tour London – The Making of Harry Potter™ – Warner Bros. Studio Tour London offers visitors the chance to relive the magic through the eyes of the filmmakers who brought the Harry Potter™ film series to life. Based at the films’ production home in England, UK, visitors can step on to authentic sets and admire the real props and costumes used during filming.