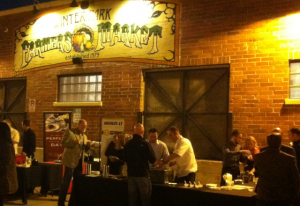 What do you get when you mix in some of the best restaurants in Winter Park and the surrounding Orlando area with a unique spin and presentation of chowder? It must be time again for the Chowder Fest at the Winter Park Civice Center presented by Winter Park Annual. The 4th annual Chowder Festival will take place at a new location this year being held inside and outside of the Winter Park Civic Center on Sunday, February 28th, 2016 from 1:30 pm until 4:30 pm.

According to Wikipedia, a chowder-dish is any type of stew or thickened-soup that contains either milk or cream. Some of the most popular types of chowder’s include New England Clam Chowder and Corn Chowder. Some variations of these popular chowders will be available with some of the 2015 participating restaurants expected to attend including Winter Park Fish Company, Maxine’s on Shine, The New Bistro on Park Avenue, Matilda’s on Park, Whole Foods, The Alfond Inn, and many more.

The event will have an unlimited sampling of chowders available for everyone that attends the event as well as 4-5 oz drink pours of beer and wine from Florida Distributing Company, L.L.C. & Orlando Brewing Company. There will also be sweets available from Sassafras Sweet Shoppe and donuts and coffee from Dunkin Donuts.

The restaurants expected to participate in the 2016 event include:

The Orlando Chowder Festival is one of the very few public events to occur at the Winter Park Civic Center throughout the year that is a popular spot for wedding ceremonies and receptions as well as other private functions. The civic center has a comfortable space inside that is great for vendor setup and a patio overlooking Martin Luther King, Jr. Park (formerly Lake Island Park). The Winter Park Civic Center has a small picturesque lake that those attending can take a walk around and is also within close walking distance to Winter Park Village.

Click here to visit the official website of the chowder festival for the latest information about the event.