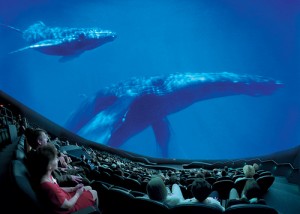 More immersive than an Imax theater, the Dr Phillips CineDome is a cross between Soarin at Epcot and Mickey’s Philharmonic at the Magic Kingdom. What would be considered an E-ticket attraction if it was part of one of Orlando’s theme parks, the CineDome completely surrounds you in a way that no theater ever has. In fact, my two year old was reaching out to touch the animals in the film when we first sat down like children often do for 3-D movies, but the film that was showing was in 2-D.

The CineDome is a 310 seat Iwerks Theater and Digistar II Planetarium that is 8 stories tall and contains 28,700 watts of digital sound from speakers that are located behind the screen. Prior to the showing of the main event, the Orlando Science Center lights up the areas behind the screen to reveal the speakers surrounding you and to give a quick behind-the-scenes look at what you are about to experience.

Movies on the CineDome

The movies on the CineDome are constantly being switched out but are always of high quality and educational. The movies being shown on our visit included Jane Goodall’s Wild Chimpanzees, Animalopolis, and Ultimate Wave Tahiti.

This entry was posted in Attractions and tagged best of orlando, loch haven park, movies, museums, orlando. Bookmark the permalink.