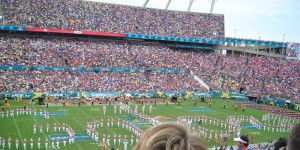 Some of the best teams from the SEC and the Big Ten outside of the College Football Playoff six bowl games meet each year at the Buffalo Wild Wings Citrus Bowl in Orlando.

The match up for 2016 bowl game to be played on Friday, January 1st, 2016 at 1 PM will have the Florida Gators of the SEC facing off against the Michigan Wolverines of the Big Ten with kickoff set for 1 pm.

Historically, the Buffalo Wild Wings Citrus Bowl has hosted teams including Georgia, Tennessee, Florida, and Penn State as they have some of the most bowl appearances since the game was first played in 1947. What started as the Tangerine Bowl in 1947, and most recently the Capital One Bowl, the Buffalo Wild Wings Citrus Bowl is now the best  college football bowl game just outside of the College Football playoff games played each year.

With the potential attendance of the game reaching 65,000 to 70,000, getting down to the stadium prior to kickoff is a good idea. There are grass-covered parking lots all around the stadium to tailgate on with some of the largest of the lots on the east side of the stadium closest to downtown Orlando. The best access to the stadium is via the 408 east-west expressway toll road taking the Orange Blossom Trail exit.

Another option on game day would be to park in one of the parking garages in Downtown Orlando and tailgate at one of the sports bars in the area and take a taxi cab or uber to and from the field to watch the game. You could also walk to the stadium from downtown Orlando along Church Street and check out the new Amway Center. Another great option this year is to take the free LYMMO bus shuttle Grapefruit line and depart at the stop at Westmoreland Drive and Church Street that will drop you off two blocks away from the stadium.

The Capital One Bowl is the final piece of Orlando’s Bowl Week. Other activities to take in during the week include the Florida Citrus Parade on Wednesday, December 30th, 2015 that will feature the marching bands and cheerleaders of the participating teams in the Buffalo Wild Wings Citrus Bowl, the Russell Athletic Bowl and Russell Athletic Bowl Parade of Bands earlier in the week in Winter Park, and finally New Years Eve in Downtown Orlando.

Click Here for the official site of the Buffalo Wild Wings Citrus Bowl.

Click Here to read our official guide of the best holiday events going on in Downtown Orlando during the Christmas and New Years season and click here for great Christmas events  and things to do all around the Orlando area including the attractions.