Florida Citrus Parade in Downtown Orlando on December 30th, 2015 at 11 AM 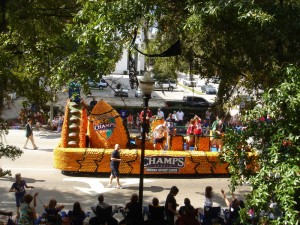 The Florida Citrus Parade will be held on New Years Eve in Downtown Orlando on Wednesday, December 30th, 2015 at 11 AM. The parade is televised nationally and celebrates Orlando’s two bowl games, the Russell Athletic Bowl and the Buffalo Wild Wings Citrus Bowl (formerly the Capital One Bowl).

The parade is the city of Orlando’s largest parade of the year and features the marching bands and cheerleaders of the two schools playing in Orlando’s Buffalo Wild Wings Citrus Bowl game. The parade also consists of high school marching bands from across the country and floats from Orlando’s biggest theme parks of Disney World, Universal Orlando, and SeaWorld. This is one of the few parades to see Mickey Mouse and Minny Mouse on a horse-drawn carriage outside of the theme parks.

Whereas with the Rose Bowl parade in Pasadena that has floats that are made from plants and flowers, the Orlando Citrus Parade consists of floats made from Florida Oranges and other citrus (see picture). Some 100,000 pieces of citrus are placed on the floats from some 600 volunteers each year for the parade.