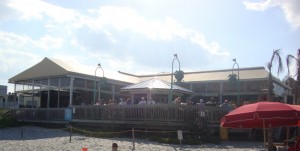 Coconuts on the Beach in Downtown Cocoa Beach is the best known beach bar for UCF students that attracts the college party crowd just about every weekend during the spring and summer seasons, especially during spring break. Live music and easy access to the beach from the outdoor cabana bar makes this a great place to have a few drinks and to mingle with the college age crowd. Multiple volleyball courts make for a lot of fun for pickup games.

Tailgating on the Beach

The atmosphere on Cocoa Beach at Coconuts has the feel of a tailgate party as beer and mixed-drinks are allowed on the beach with tents and beer-pong type games setup amongst the crowd. It is not uncommon to hear some very interesting conversations amongst those lounging out on the beach and the occasional f-bomb being dropped every few minutes. Stating that, the community beach areas surrounding Coconuts is not the best place for families and those easily offended. For families looking for a fun time at the beach, we recommend the Cocoa Beach Pier.

Coconuts on the Beach serves quality seafood and other common bar and grill specialities with chicken and seafood wraps mixed in with hamburgers and fish tacos. Dinner includes the fresh catch of the day, shrimp, lobster tails, and crab cakes.

Cocoa Beach is about a 45 minute drive from the Orlando International Airport and is the closest beach to Orlando. Take the Beachline (528) all the way until it turns into A1A to reach downtown Cocoa Beach. Park along A1A just before Minutemen Causeway. During peak periods, pay for parking in the surrounding parking lots.

Coconuts on the Beach Video


Coconuts on the Beach Map