Dinner and a Movie Date Night at Winter Park Village 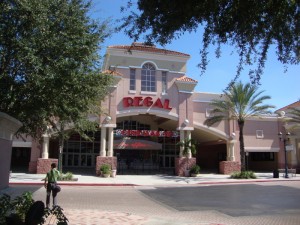 Winter Park Village is a smaller outdoor shopping center in the city of Winter Park that hold’s the city’s only major movie theater chain that shows first run movies in Regal Cinemas. There is a handful of restaurants at the shopping center to make for a great date night.

About the same time that the Cheesecake Factory, Brio Tuscan Grille, and PF Changs China Bistro were entering the Orlando market at the Mall at Millenia, the three major restaurant brands signed up to be the major restaurant tenants at Winter Park Village as well.

The Cheesecake Factory has a never ending menu, huge portions at reasonable prices, and fantastic desserts including Cheesecake. Brio Tuscan Grille is an Italian restaurant that focuses a little bit more on their steaks, chicken, and seafood, but the pasta shines as well. PF Changs has the best chinese cuisine that I have had anywhere that is served on plates that are ready to share. PF Changs also has a preferred call-ahead reservation type system in place.

In addition to the restaurants above, there is also Seito Sushi, Mitchell’s Fish Market, and Ruth’s Chris Steakhouse. In the Spring of 2011, Taps Beer and Wine is schelued to open up in the space formerly occupied by Starbucks and Schakolad Chocolate. Directly across the street from Winter Park Village in walking distance is Wazzabi Japanese Steakhouse and Sushi Bar, an Olive Garden, and Siam Garden Thai Restaurant that has the best Chicken Panang that you will ever have.

If you are looking for a quick bite of pizza before the movie, Pizzeria Valdiano has some of the best pizza in Orlando that can be ordered by the slice or by the pie in addition to a full menu of italian specialties. You can also grab a flatbread, sandwich, or salad at Crispers.

Menchi’s Frozen Yogurt directly next to the theater and Yogurtland across 17/92 allow you to self-serve from several different frozen yogurt machines and put on your own toppings at a great price. Cold Stone Creamery is also across Mills Avenue to get your ice cream fix.

The Borders in Winter Park Village serves Seattle’s Best Coffee or walk across 17/92 to the Starbucks next to Yogurtland to get a coffee after the show.

If you are celebrating a special occasion for your date night and don’t mind driving a few minutes to the movies after dinner, click here to check out our top 10 romantic restaurants in the city of Winter Park.

If you plan on attending a movie on the premier weekend or on a holiday like Valentine’s Day or Mother’s Day, it’s a good idea to purchase your tickets in advance using Fandango so that you don’t run the risk of the show selling out and you have the benefit on not needing to stand in line.

This entry was posted in Restaurants and tagged date night, movies, winter park. Bookmark the permalink.