Dining at the Disney Dream Restaurants including Remy, Palo, and Animator’s Palate 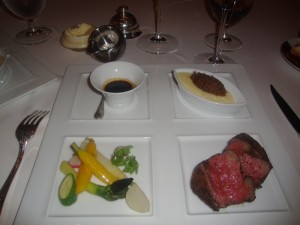 One of the best parts of going on a Disney Cruise is the luxury of being able to eat at a nice restaurant for breakfast, lunch, and dinner for the entire stay of your trip. On our 5 night cruise on the Disney Dream, we had the chance of eating dinner at Enchanted Garden, Animator’s Palate, and Cabana’s with breakfast at Royal Court, and a special anniversary dinner at the upscale French Restaurant Remy. With a mention of the Palo restaurant that we visited on a previous Disney cruise, this is our guide to eating at the restaurants on the Disney Dream.

Dining on the Disney Dream can be categorized in three different ways where the first option involves staying on track with the restaurants Disney has planned for you, a second option of eating on your own schedule at Cabana’s or one of the food courts on the pool deck, or the third option of upgrading your dining experience to one or both of Disney’s signature restaurants.

If you follow the agenda that Disney plans out for you at the beginning of your trip without adding any extra’s or modifications, there are three main restaurants that you will dine at throughout the course of your stay in the Enchanted Garden, Animator’s Palate, and the Royal Court that servers dinner in a reception-style format where everyone in the room receives their meals around the same time. 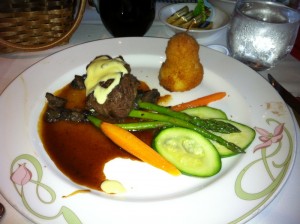 Upon your arrival onto the ship, you will be given an agenda letting you know which restaurant you are designated to eat at and at what time you will dine. Your dinner time will be at the same time each night at either 6pm or at 8pm. The dinner times swap with the featured entertainment for the night so that you will either watch the Disney show prior to dinner or after dinner. The first three nights of your cruise will feature the menu items that are dedicated specific to the restaurant that you are eating at while the final nights of your cruise will have the same menu across all of the restaurants on the ship (including Cabana’s).

While you are eating at your designated times, you will have the same wait staff waiting on you each night that Disney calls it’s “rotational dining” so that you don’t have to keep telling your staff your “likes” and “dislikes”. This way the wait staff will already know whether you would like to have a regular or decaff coffee with your dessert. It is also a great way that Disney is able to personalize the trip. Just hope that your wait staff is competent and you aren’t stuck with them your entire trip. Ours were good. 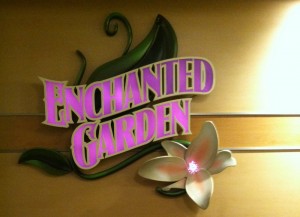 The first restaurant that we dined at on the Disney Dream is called Enchanted Garden whose enclosure changes throughout the course of the meal during the evening hours from a green room with green leaves surrounding you to start your meal to an artificial nighttime sky by the time that you are finished. 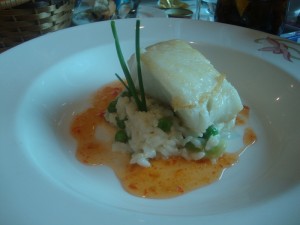 We first dined at Enchanted Garden on our first day for both lunch and dinner. When we first boarded the ship upon our arrival, we went down to Enchanted Garden for their lunch buffet that featured full course meals along with salad, sandwiches, and desserts to choose from.

For dinner, I had the Sea Bass (see picture at right) for my main course that was excellent and similar in quality to the Sea Bass that I had for one of my courses at the Remy dinner that was very tasty. 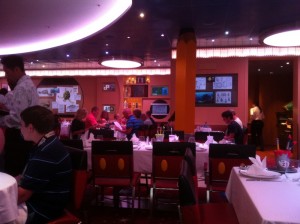 Our second night had us visit Animator’s Palate for dinner, which is the 2.0 version of the original restaurants of the same name that are on the Disney Magic and Disney Wonder. The highly-themed restaurant set to an animator’s studio and workshop has monitors everywhere that surround you with images of characters from the Finding Nemo movie in a virtual fish tank and aquarium. At one point during your meal, the famous sea turtle from the movie, Crush, will come and joke around with the children at your table using surfer vocabulary that is a ported attraction of Turtle Talk with Crush at Epcot. As you can see in the picture above, the chairs at the restaurant resemble the body of Mickey Mouse. 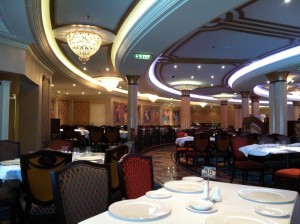 Outside of the three restaurants highlighted above, the Disney Dream has a fourth available option for dining at dinnertime called Cabana’s. The Disney-theme for the Cabana’s restaurant is tied to Finding Nemo but is very subtle and features palm trees with window views all around and al fresco dining available. This makes Cabana’s a great choice for visitors on the ship that would like to take a break from everything-Disney related for an hour or so. It is also a great option if you feel like breaking away from the structured itinerary for the day. We did just that on our day at sea and pirate night where we were having so much fun at the pool with our children that we decided to forgo our normal dining night and eat at Cabana’s instead. While everyone else on the ship had left the pool area to get ready for dinner, the pool and children’s area cleared out a good amount and the line for the slides were shorter. As stated previously, after the first three nights on the ship, the restaurants all serve the same menu (including Cabana’s). Cabana’s also features a breakfast buffet each day on the ship and is a late-night dining option after the fireworks on the pirate night that features Disney’s famous turkey legs along with other items and desserts. 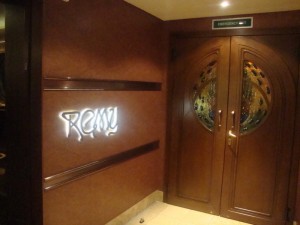 To help celebrate our wedding anniversary, my wife and I booked a very special dinner at the Disney Dream’s signature restaurant called Remy. Remy is a restaurant that was inspired by Disney’s Ratatouille movie and serves contemporary and modern French cuisine. The menu at Remy serves seven courses and was constructued by Chef Arnaud Lallement from L’Assiette Champenoise, a two-star Michelin restaurant in Reims, France and by Chef Scott Hunnel who is the head chef at Victoria & Albert’s at Disney’s Grand Floridian signature hotel at Disney World.

Some of the English translation of the menu items on the night of our visit included Macadamia Espuma, Lobster and Fish Soup, Jura Wine Gnocchi, and SeaBass with Cauliflower. Some of our favorites included the Herb-Crusted Lamb and the Wagyu Beef Short Ribs (see picture at top).  Also served with dinner was a black truffle bread, that reminded us of the black truffle fries at the Ravenous Pig in a good way, a great selection of cheeses at the end of our meal wheeled out on a cart, and an Blood Orange Timbale and Crispy Chocolat dessert that we split. We opted for one of the wine pairings for $99 that delivers a glass of wine with each of the courses that we highly recommend.  We were able to replace one of the dishes with Ratatouille that was just okay.

We also overheard from one of the waiters that Remy has a completely separate menu than the one that was given to us if you would like to dine there for a second night on your cruise.

For those of you that have lived in Orlando a few years, Remy reminded us of some of the romantic dining locals used to have available with Manuel’s on the 28th in Downtown Orlando and Arthur’s 27 in Lake Buena Vista that are no longer open. Having dined at the Northern- Italian restaurant Palo on a previous Disney cruise, we can recommend both Palo and Remy as great options for a dinner upgrade.

For the four restaurants on the Disney Dream that do not require an upgrade, expect to get a great meal that you would receive at a nicer restaurant within Orlando. If the upgrade to dining at Palo is similar to visiting a nicer-upscale steakhouse, Remy’s upgrade is equivalent to a fine-dining experience that has been compared to Victoria & Albert’s at Disney’s Grand Floridian. We have never dined at Victoria & Albert’s but are now interested in spending a special evening out there after having dined at Remy (see video below).