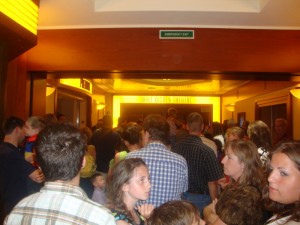 Part of the major appeal of booking a Disney Cruise vacation is the top quality Broadway-Style family shows on each ship that features many Disney characters of past and present singing and dancing. This is our guide to Villians Tonight, the Golden Mickeys, and Disney’s Believe on the Disney Dream.

During our 5-night voyage on the Disney Dream we were treated to Disney’s three broadway-style shows of Villians Tonight, the Golden Mickeys, and Disney’s Believe. The Golden Mickeys and the ships signature show Disney’s Believe were highlights of the entire trip with the number of performances and special effects used during the shows while the Villians Tonight show left us wanting just a little bit more.

The first show during our trip was called Villians Tonight that is one of the most unique Disney shows that we have seen on any of the ships or at the parks, but not necessarily in the best way. Unlike many of the other Disney productions that features heroes and heroines, Villians Tonight is a show that is all about the bad guys. The way Disney pulls this off with still making it family friendly is by making it a comedy where the audience is encouraged to “boo” the villians on stage, similar to booing Simon Cowell on a talent show competition. The booing was fun but the hangup for me was that many of the Disney villians seemed out of place with the roles you typically see them in where they are in a scene to scare you. There were also some continuity issues where the characters are acting in ways that you wouldn’t expect them to. In one segment that celebrates sidekicks, there is a duet between Aladdin’s Jafar and his bird Lago where they fly around on stage in a ballad to each other. This just isn’t something Jafar would ever do.

The Villians Tonight show format reminds me of the Bill and Ted Halloween Shows at Universal Halloween Horror Nights at Universal Studios as they keep the show very light and include a lot of pop culture references by the master of ceremonies, Hades from Disney’s Hercules. Some of the references in our show included the television shows Project Runway and Jersey Shore.

One of the brighter spots of the show is the acting and humor of Hades that was very reminiscent of a Jay Leno stand-up show. Other scenes that stood out included Scar from the Lion King singing “Be Prepared” and the Little Mermaid’s Ursula singing “Poor Unfortunate Souls”. Outside of some of the issues that I had with the overall show, in the end I still appreciated the show for what it was and give Disney credit for trying something a little bit different outside the box. The show is still a must-see on your cruise itinerary and would fit in great at the annual Halloween event at the Magic Kingdom but it seemed a little bit out of place on a cruise ship headed to the Bahamas.

The Golden Mickeys is the Disney Dream’s show that prominently showcases the core Disney characters of Mickey Mouse, Minnie Mouse, Donald Duck, Daisy Duck, Goofy, and Pluto along with many other characters. The setting is set around an awards show, complete with the red carpet for the characters, that celebrates some of Disney’s greatest animated movies. Some of the highlights of the Golden Mickey’s include a Little Mermaid scene complete with Ariel swimming around on stage under the sea with Flounder and Sebastian, a scene with a very acrobatic Tarzan swinging around that is a throwback to the old Tarzan show that once played at Disney’s Animal Kingdom, and a Toy Story scene set in Andy’s Room where all of the characters have to freeze at one point (some in midair) when a human is about to enter the room. There is also a Disney Princess scene that was a favorite for my daughter. This is the type of show that you book your Disney Cruise for.

Disney’s Believe is the signature show on the Disney Dream that plays on the final night of the cruise itinerary where Disney saves the best for last. The show starts with a work-a-holic father that doesn’t have much time to spend with his daughter or have the patience for her belief in magic. The underlying story of a father being too busy to spend time with his daughter somewhat parallels the 201o direct-to-video “Tinker Bell and the Great Fairy Rescue” (which was a surprisingly good movie by the way). Disney’s Believe stars many of Disney’s classic characters with some of the best segments being “Step in Time” from Mary Poppins, “Be Our Guest” from Beauty and the Beast, “Circle of Life” from the Lion King, and a rousing performance of “Dig a Little Deeper” from the cast of The Princess and the Frog. Disney’s Believe is Disney at it’s best.

To conclude, we highly recommend making sure you take in all three of the major shows aboard the Disney Dream regardless of what movie is playing at the Buena Vista Theatre and that you make sure that your dinner reservations at Remy or Palo do not conflict with being able to catch one of the shows. Also, we recommend showing up at least 15 minutes before the show begins (see picture above) or you may get a seat with a partial view of the stage in the back of the Walt Disney Theatre.