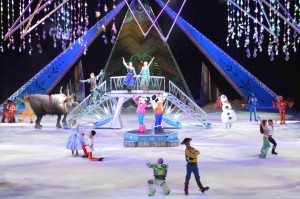 Feld Entertainment’s Disney on Ice recently unveiled their new ice skating spectacular based on the new animated Disney classic “Frozen”, sharing the same name, and it is the best Disney on Ice show that I have seen. To take it one step further, Disney CEO Robert Iger has stated that Disney plans on eventually staging a Broadway musical based on the movie but this show really belongs on the ice and Feld Entertainment has given the franchise exactly what it needs. The show runs for close to two hours and brings just about every scene and musical arrangement from the movie to the ice rink that will delight any fan of the movie.

If Disney was smart, they would partner with Feld Entertainment on building a permanent home for the show similar to La Nouba at their new Disney Springs development (formerly Downtown Disney) and the show would pack in audiences for at least the next decade or longer. There is some vacant land right next to the House of Blues and across from Cirque du Soleil where they could build it.

Disney on Ice “Frozen” appeals to both children and adults. The show quickly elevates above the obligatory beginning and ending of the show with the characters of Mickey Mouse and friends. The bookend scenes feel out of place at a showing of Orlando residents that are used to seeing Mickey Mouse and his friends frequently at the parks but makes sense for a traveling show for audiences that do not see the characters as much.

Overall, the Disney on Ice shows that have played at the Amway Center over the last few years have all been very good and you typically get to see newer characters and stories played out not usually seen at the local parks. This has been true of productions of Tangled and The Princess and the Frog in recent years. The Frozen production has been the first that I have seen where almost the entire show is dedicated to one franchise but it was the right call to make and audiences around the country are really going to love this ice show as much as the movie.

This entry was posted in News and tagged amway center, review. Bookmark the permalink.