A Guide to Spending the Christmas Holidays at Disney World Including the Magic Kingdom, Epcot, Hollywood Studios, and Animal Kingdom 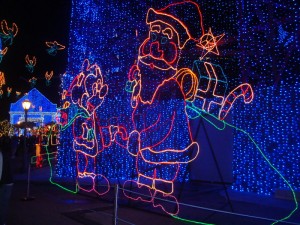 Visiting Disney World during the Christmas Holiday each year is one of the best times to visit the parks as special holiday shows, lights, and fireworks are on display each year as Disney celebrates the season and rings in the new year.

During the holidays, the Magic Kingdom holds a special nighttime Christmas event while Epcot hosts visiting schools and choirs to participate in the retelling of the Christmas Story. At Disney’s Hollywood Studios are millions of Christmas Lights that are synchronized to holiday music in a residential-type environment. With these Christmas events and attractions, there are all types of Christmas experiences around every corner that has made Orlando the most popular destination to visit for Christmas and New Years Eve. This is our guide to spending the Christmas Holidays at Disney World. 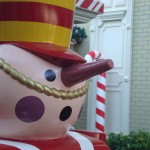 A question that is typically asked of local residents of the city of Orlando is whether they visit the theme parks in the area since they live here. As a local resident of Orlando since 1994, I can say that most residents that I speak to do visit the parks and many of them will be somewhere on Disney property during the Christmas season to take in the sights and sounds of the season.

For some residents, the Christmas season is a big motivator to buy an annual pass or more casual fans of Disney may just visit for the day to hop between the hotels on property to take in all of the holiday decorations and the gingerbread house at the Grand Floridian. Some will be visiting with family members from out of town that are staying on Disney property with their families. Without the natural elements of real snow and icicles in Florida to take in the holiday, the atmosphere at Disney is the next best thing. 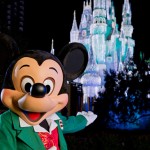 Christmas at the Magic Kingdom

The highlight of the Christmas Season begins in early November as the Magic Kingdom puts on a separate-ticket event on select nights called Mickey’s Very Merry Christmas Party that features a Christmas Parade, Fireworks, and many other types of Holiday entertainment to celebrate the season. Another highlight both during the event and to guest during normal park hours is the lighting of Cinderella Castle that you can find out about here.

The final dates of Mickey’s Christmas Party are 4 days or so before Christmas in which many of the same entertainment can be seen during normal park hours through New Years Eve. Santa Claus is available for Christmas wishes on Main Street USA next to guest services. 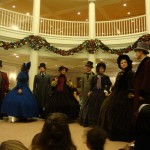 The highlight of celebrating Christmas at Epcot is seeing the Candlelight Processional Christmas Concert at the American Gardens Theatre where many different vocal groups and organizations participate in the retelling of the Christmas Story with a celebrity narrator. The show began in 1956 when Walt Disney held the first performance at Disneyland. Other highlights of celebrating Christmas at Epcot is seeing Christmas Carolers, seeing how other Countries celebrate Christmas through storytelling, and watching the special holiday grand finale to the fireworks show at Epcot at night. Also, the American Adventure Pavilion is the only spot at any of the theme parks where you can meet both Santa Claus and Mrs Claus together.

Click here for more information about the Candlelight Processional and here for information regarding the Christmas Caroling. 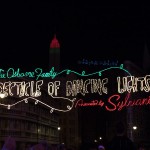 What may very well be the most popular Christmas attraction at Disney World through all of the parks is the Osbourne Family Spectacle of Dancing Lights that immerses you with millions of Christmas Lights in a faux multi-story residential area of Hollywood Studios. The Christmas Lights are synchronized to classic holiday songs that are presented in a format that makes it sound like it is being played on a  radio station from an earlier era. The Osbourne Family Spectacle of Dancing Lights is a holiday tradition for many local pass holders living in the Orlando area and enjoyed by tourist alike. Instead of meeting Santa Claus, guest can meet Santa Goofy. 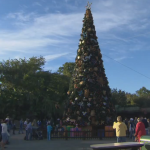 The highlight of celebrating Christmas at Disney’s Animal Kingdom is their Christmas Parade that is performed daily called Mickey’s Jingle Jungle Parade. The parade features Mickey Mouse, Minnie Mouse and other characters in holiday attire. The park also has an animal inspired Christmas Tree at the entrance of the park but for the most part Animal Kingdom’s Christmas offerings are very limited as compared to all of the other theme parks in Orlando. 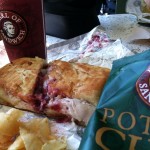 At Downtown Disney during the holidays, the focus is on the shopping as holiday window displays and other decorations are displayed throughout the shopping center. At the “Once Upon a Toy” store, you can pick out your little girls favorite princess dress that is made exclusively for the Disney Parks stores that is a lot better quality than the ones they sell at Target but is also costlier.

Also on hand are performances by holiday carolers and stilt walkers. Santa Claus is also available for pictures during the holidays. One of our favorite things to do during the holidays at Downtown Disney is going to the Earl of Sandwich shop and getting their seasonal “Holiday Turkey Sandwich” (see picture at left) that literally taste like Thanksgiving Dinner on a bun with turkey, stuffing, cranberry sauce, and warm gravy. This is our favorite sandwich in all of Orlando. 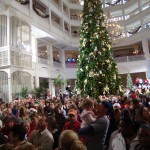 Celebrating the season of Christmas is not just for the theme parks and shopping areas. Disney also decks out Christmas decorations at the different hotels on property that blends in the theme of that particular hotel with Christmas. At the Grand Floridian hotel is the top draw with a people-sized gingerbread house. Other gingerbread creations can be found at the Contemporary Resort, the Boardwalk, and the Beach Club.

Click here for more information about the gingerbread house at the Grand Floridian.

Christmas Outside the Parks

Here at Orlando Local Guide we pride ourselves on giving visitors to our website information on things to do locally around Orlando and the Christmas Season is no different. Stretch out your vacation a day or two by taking in some of the great events going on in Downtown Orlando that can be found here or Winter Park that can be found here.

Click here to see all of the things to do around Orlando during Christmas.