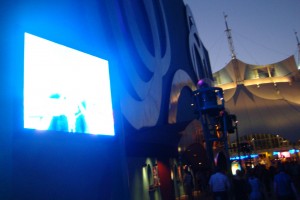 If you’d rather bring in the new year with confetti at Disney World instead of fireworks, DisneyQuest at Downtown Disney offers a family-friendly New Years Eve Party for an affordable price.

Downtown Disney used to celebrate New Years Eve every night when Pleasure Island was still open as a separate admission, but as Disney World has kept the theme parks open later throughout the year the need for Pleasure Island as a nighttime nightclub destination had diminished that led to it’s ultimate closure. To experience the nightclub-type atmosphere that Downtown Disney used to have, Epcot hosts several DJ’s around World Showcase and Disney’s Hollywood Studios has a special comedy improv show with many of the same comedians that performed at Pleasure Island.

For New Years Eve celebrations the last two years, the main event at Downtown Disney has been Disney’s indoor video game theme park called DisneyQuest. If Disney follows last years New Years plans for Downtown Disney, from 8 PM until 1 AM on New Years Eve, guests can play high-tech video games, attend a dance party with a DJ, and celebrate the new year with a confetti drop at midnight.

Another option for NYE 2015 is taking in some bowling at the new Splitsville Bowling Alley that has set up shop in the building that formerly housed the Virgin Mega-Store.

This entry was posted in Attractions. Bookmark the permalink.