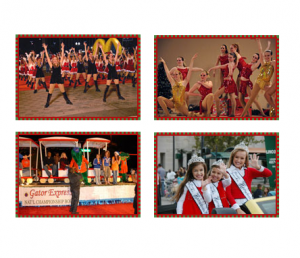 The annual Orlando Christmas Parade and Holiday in the Park Festival returns to Orlando at a new location of Orlando Fashion Square Mall on December 13th, 2014.

This year the parade is at a new location: at the Orlando Fashion Square. Check back at a later time for the map.

Leading up to the Orlando Christmas Parade will be a holiday festival that will take place in the parking lot of the Orlando Fashion Square that will feature holiday entertainment from 10 am to 5 pm.

Previous years’ recording artists have included the likes of Prita Chhabra, Johnny Martino, Orlando Jones, and dance groups J-Groove and Standing Ovation. At night, the square will light up with Christmas Lights in the trees and holiday music being played.

In addition to all of the activities taking place on the outside, Fashion Square’s new bowling alley is now open and the latest holiday movies will be playing at the Mall’s movie theater.

At 1:00 pm, a pet costume contest will take place at the park with the participants being able to participate in the parade. Also, from 11 am to 11:30 am the Jingle Bell Dog Jog Parade will circle the square.

Click here for our guide about Christmas activities in Downtown Orlando and here for all Christmas events in Orlando.