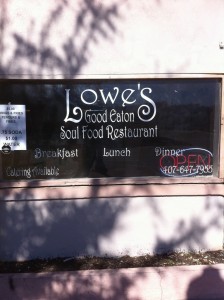 Eatonville is a town 5 miles north of downtown Orlando that was one of the first all-black towns to be formed after the Emancipation Proclamation in 1863 and was incorporated on August 15, 1887.

Known historically as the town where Zora Neale Hurston spent the majority of her life, which is celebrated in the annual Zora Festival in January each year, Eatonville has some of Orlando’s most cultural attractions when it comes to celebrating black history. The Zora Neale Hurston National Musuem of Fine Arts showcases the visual art of promising, emerging and established artists of African descent.

Click Here to view the 67 days of smile review of the Hurston Musuem.

Eatonville also has a very popular soul food restaurant in Lowe’s Good Eaton Soul Food Restaurant that serves some of the best barbecue ribs in all of Orlando with macaroni and cheese, cornbread, and greens. If you are looking for some great southern comfort food, give Lowe’s a try. Ox Tail and Grilled, Fried, and Thai Chicken are on the menu each day of the week whereas the barbecue ribs are currently only available on Fridays.

View Eatonville in a larger map

This entry was posted in Cities and tagged eatonville, travel guide. Bookmark the permalink.