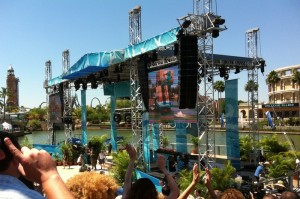 Ellen DeGeneres will be filming her television show of the same name, The Ellen DeGeneres Show, on Sunday, April 3, 2011 at Universal Studios Orlando. Ellen DeGeneres has been coming to Universal Orlando for the last several years to tape her show in the Spring and has popular celebrities as guest and top musical performances (see video below).

The Ellen DeGeneres Show tickets quickly sold out with the television show tapings being filmed in the outside common area of Universal Orlando Citywalk. There will be two shows taped on Sunday, April 3, 2011 beginning around 12 PM that will air on Tuesday, April 5 and Wednesday, April 6 2011.

Watch the video below of Ellen’s favorite Orlando moments for the 2011 event.

This entry was posted in Events and tagged media. Bookmark the permalink.