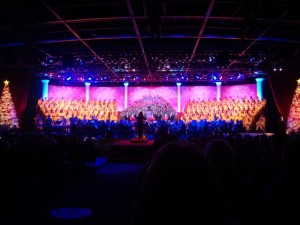 The Candlelight Processional Christmas Concert at Epcot in Disney World is the best Christmas event to be experienced in any of the theme parks in Orlando and also has the most history of any other event, beginning with Walt Disney himself, organizing the first event for Disneyland in California in 1958.

Whereas some of the other Christmas shows and activities at the theme parks may have a larger “Wow” factor, the processional’s base starts deep in scripture, getting back to the basics of the Christmas season and what it really is all about, the birth of our Lord and Savior, Jesus Christ. There is something very real that happens with each performance which brings audiences back year after year in droves, paying for expensive dinner packages, and still waiting 90 minutes in line to get a great seat. For the finale, the audience stands and sings in praise of Hallelujah.

The processional dates back to the first Candlelight Processional created by Walt Disney for Disneyland in 1956. When the Magic Kingdom opened at Walt Disney World in Florida in 1971, the event was brought over and eventually moved over to it’s current home at Epcot in 1994. Close to 400 performers made primarily of volunteer choirs, the Walt Disney Orchestra, the Disney Voices of Liberty, and one celebrity narrator brings the Christmas story to life with scripture intertwined with traditional Christmas hymns including “O Holy Night”, “Away in a Manger”, “What Child is This”, and “Silent Night” amongst others.

Planning to Attend the Candlelight Processional

If there was an attraction or show at the theme parks that is difficult to attend, this would be it. Preferred seating is given to guests that book dinner packages at Epcot at several of the restaurants in their World Showcase. The dinner package is a prix fixe menu to select mostly an appetizer, main course, dessert, and non-alcoholic beverage. The dinner package gives the best seating for the Candlelight Processional as well as a preferred viewing location for Epcot’s firework spectacular, Illuminations Reflection of Earth, that has a special holiday grand finale in addition to it’s usual grand finale that blast fireworks to the song “Let There Be Peace on Earth”.

The dinner packages start to sell out quickly for the entire event when they are released in late summer / early fall. The 8:15 pm shows sellout quicker with the packages for the 5 pm show still available during the time of the actual event. You can still attend the show without buying a dinner package but plan on waiting in the non-dinner package line for 90-120 minutes prior to the start of the show.

The Epcot Candlelight Processional always begins on the Friday after Thanksgiving and continues late into the month of December. The 2015 event begins on Friday, November 27th, 2015 and finishes on Wednesday, December 30th, 2015. There are three shows each night at 5 pm, 6:45 pm, and 8:15 pm, with the exception of December 6th, 2015 in which there’s no 5 pm event.

The following is a list of narrators for 2015 (which is subject to change):

Similar Events to the Candlelight Processional around Orlando

If you have attended the Candlelight Processional in the past and would like to attend a show similar in style but different, then we highly recommend The Singing Christmas Trees at First Baptist Church of Orlando. The Singing Christmas Trees uses some of the same technology that Disney uses for it’s dancing lights and many of the performers in the show have worked at the major theme park shows. The show contains a 300 person choir and full orchestra similar to the Candlelight processional.

Click Here for more information about the Singing Christmas Trees.

Click Here for more information about the Epcot Candlelight Processional and to book a dinner package for the event.

Below is a video of the Epcot Candlelight Processional with Whoopi Goldberg as the narrator: