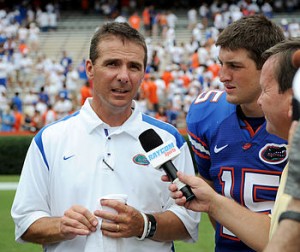 According to this blog post from the official Disney Blog, the 2011 ESPN The Weekend event will be the final ESPN Weekend event to be held at Disney World. The event began in 2004.


If there is ever a time that a group of guys get together and say, “Hey, Let’s go to Disney World”, this would be the weekend. This is the physical incarnation of bringing the television world of ESPN and everything that goes along with it to be live and in person. ESPN The Weekend is the best event for a guys day out that is the next best thing to attending a major sporting event. ESPN The Weekend will take place on March 3, 2011 through March 6, 2011 at Disney’s Hollywood Studios at Walt Disney World.

What is ESPN The Weekend?

ESPN The Weekend is filled with some of the sports world best athletes and popular ESPN personalities that interact on live televised programming and off-the-air question and answer sessions. Moderators allow for guest to ask questions of their favorite athletes and coaches on just about anything that they want.

ESPN The Weekend has also grown into showcasing the ESPN Wide World of Sports Complex on Disney Property kicking off the Atlanta Braves Spring Training Games that are played at Disney World. ESPN is also adding a very nontraditional-Disney Fight Night to the event in 2011 for the ESPN Friday Night Fights show at the Sports Complex on Friday, March 4, 2011 featuring six professional bouts headlining NABF Light Heavyweight Champion Ismayl Sillakh (14-0-0) and challenger Yordanis Despaigne (8-0-0). There is also a 5k race on Saturday, March 5, 2011 at the complex to celebrate the event.

Enough about the fighting. Disney World is all about the kids, right? The best part of the event for children outside of meeting their favorite athletes is participating in the athletic skills games of throwing fastballs, footballs, and shooting hoops in a special area not usually accessible to guest at the park over by the Rock ‘N Roller Coaster Ride.

New to the 2011 event are the Celebrity Mascots featuring the Philadelphia Phillies Phillie Phanatic and popular Florida-based mascots of Albert E. Gator (University of Florida), Sebastian the Ibis (University of Miami), and Captain Fear the Buccaneer (Tampa Bay Buccaneers) amongst others .

If you are the type of person that typically has no interest in going to Disney’s theme parks normally but are attending the ESPN event because you are a fan of sports, we also highly recommend that you check out the testosterone-laden extreme car stunt show called Lights, Motors, Action! Extreme Stunt Show which features extreme car tricks, stunts, and a motorcyclist getting caught on fire. The stunt show is an attraction that is a part of the park year round.

Post your questions and answers in our comments section below on any questions that you have about ESPN The Weekend.