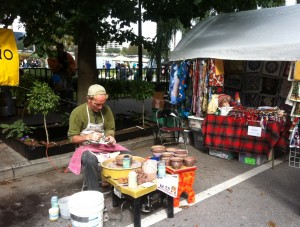 The Fall Fiesta in the Park will bring over 400 arts and crafts vendors to Downtown Orlando on Saturday, November 5th and Sunday, November 6th, 2016 from 10 AM-5 PM at Lake Eola. New for 2016, the festival has a 10am start time instead of the 12pm start time in years past.

Fall Fiesta in the Park

The Fiesta in the Park is Orlando’s biggest annual arts and crafts festival that takes place twice a year, once during the fall season in the beginning of November, and the other event in the spring during the month of April. Now in its 46th year, the arts and crafts on display are from local vendors that comprise of jewelry, children’s clothes, wood crafts, and other unique and interesting gifts. There are also several booths during the Fall event that has many holiday items to purchase and get some early Christmas shopping done. There are also many food vendors to choose from.

Proceeds of the event go back to the City of Orlando for park renovations, police dogs, horses and more. There will also be bounce houses, games, animals, and other free activities for children.

Click here to read about various art festivals going on in Orlando throughout the year.

In two independent events of the Fiesta in the Park event, there will also be a children’s fun fair and a weekly farmers market taking place in downtown Orlando over the weekend.

On Saturday, November 5th, 2016, the annual children’s Fun Fair held by the Weekday School will take a few blocks away from Lake Eola that will have pony and train rides along with other games and a silent auction.

On Sunday, November 6th, 2016, Downtown Orlando will also be hosting their weekly farmers market that has grown significantly over the last few years that will include additional merchants, fresh produce, and live music all within the same area of the arts and crafts show.

Fiesta in the Park Video