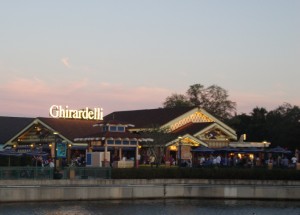 The story below was written in 2011 when Disney Springs was still called Downtown Disney. Much has changed since that time but this article has been kept in tact as a reminder of what a night out at Downtown Disney looked like for a father and daughter in 2011:

I recently took my daughter out for a special night of her choosing at Downtown Disney. Mom was busy with some friends and the two of us needed to get out of the house. When contemplating the places to take a three-year-old for a couple of hours out of the house, Downtown Disney seemed to be the perfect place.

We started our night parking in the Westside section of Downtown Disney by the House of Blues that doesn’t get as crowded as the Marketplace side. We leisurely walked down the strip and she was in awe of the House of Blues water tower and Cirque du Soleil building. If there was a good children’s movie playing at the AMC theater, a movie would have been a great time.

We decided to skip the movie and browse the shops instead. At the Magic Shop, one of the salespersons demonstrated a coloring book where the pictures in the book appeared, disappeared, and then appeared again in color. The candy shop had a large figurine of the bad witch from Snow White that my daughter loves to hate.  We watched the Disney workers make caramel covered apples that were being dressed up as Mickey Mouse. The magnet store had many fun magnets to look at. She enjoyed playing with the magnets shaped as hot dogs and popcorn. In the corner were butterfly magnets. When walking out, a saxophonist was playing along to covers of the Black-Eyed-Peas and Katy Perry (see video below). We took a few minutes to let her dance to the music.

We walked down the Pleasure Island area that has street entertainment with live bands and mimes. We then walked by the Lego Store where she pointed out Lego figurines of Snow White and the Seven Dwarfs and Buzz Lightyear and Woody. We walked by the T-Rex restaurant we had visited on her second birthday that she had since forgotten about. The dinosaurs looked overhead.

Ghirardelli was the planned destination of the night for a special treat as I ordered a hot fudge sundae for the two of us to split. She enjoyed eating the whip cream and asked for the cherry. Conversations with your kids are always fun over ice cream.

After finishing our ice cream, we walked down over by the Rainforest Cafe that had large gorillas to look at. It was starting to get late so we boarded the free water taxi that provides a great view of Downtown Disney as it heads back to the House of Blues close to our parking lot. It turned out to be a great night and one that I would recommend to my friends with kids.

Click Here to read our story of a father-daughter day at Typhoon Lagoon Water Park and click here for our recommendations of spending Fathers Day at Disney World.