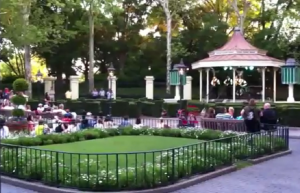 Disney World is all about the kids but there is one day out of the year that the focus should shift over to dad. Whether your kids are younger and you want to experience some of the more jaw-dropping rides together or they are older and a dinner at a nice restaurant would suffice, this is our guide to celebrating all fathers at Disney World on Fathers Day.

When it comes to celebrating Fathers Day, there are usually two types of men that the celebration can be happening for if you are in your 30’s or 40’s. The Fathers Day celebration can be for you or your spouse from your own children or you may be celebrating Father’s Day for your father or father-in-law. The best theme park for the former at Disney World that appeals most to this type of father is Hollywood Studios with it’s roller coaster rides and stunt shows to watch. For grandpa, going from 0 to 60 on a roller coaster in a few seconds time may not be as appealing as it was a few years ago, but some international cuisine and entertainment might be nice. In this case, Epcot is the best park that is going to appeal the most to grandpa.

It may not have started out this way when it was initially designed but Hollywood Studios seems to be the park consistently picked by Disney to add attractions to that are going to appeal to men. Some of the most recent attractions include the upgrade to the Star Wars simulator attraction that is now in 3D, a signature new stunt show with cars and motorcycles flying in many different directions where one of the stuntmen in the show catches on fire, and a throwback midway ride using bleeding-edge 3D technology to simulate the games in an ultimate arcade-type experience with the characters from Toy Story as the master of ceremonies.

That is in addition to the two biggest heart-pounding attractions on Disney property with the Rock ‘n’ Roller Coaster attraction staring Aerosmith, that is the only roller coaster on property that goes upside-down, and the Twilight Zone Tower of Terror that drops you down for several instances faster than the speed of gravity.

Other attractions that appeal to dads at Hollywood Studios include the Indiana Jones Stunt Show and the Fantasmic! nighttime stunt and special effects show that includes many pyrotechnics. For dinner at Hollywood Studios, we recommend the Brown Derby.

When choosing a theme park at Disney World to visit with your grandfather, Epcot should be considered at the top of your list. At each of the different countries are a specific show to watch and enjoy. China and France have acrobats, England and Canada have live music, and many of the other pavilions have some sort of demonstration to showcase that particular countries unique cultural ideas and customs.

Epcot also has some of the more milder attractions of all of the parks including Spaceship Earth that brings back some nostalgia that is the ultimate history lesson using Disney animatronics, the Living with the Land ride that showcases agricultural history and technical advances, and the popular Soarin attraction that simulates hang-gliding over the state of California.

Epcot also has some of the best dining experiences in Walt Disney World with recommendations of the Monsieur Paul restaurant in France or Le Cellier Steakhouse in Canada. For a more exciting atmosphere, there is a Japanese Steakhouse in Japan and Belly Dancers at Restaurant Marrakesh in Morocco. After dinner is the Illuminations Fireworks Show over the World Showcase lagoon that is Disney World’s best fireworks show that happens nightly.

Outside of the theme parks, Disney’s Palm and Magnolia Golf Courses are available to play just across the street from the Grand Floridian resort and are Disney World’s signature golf courses that had been part of the PGA tour each year in the fall for the Children’s Miracle Network Classic until 2013. Other golf courses on property include Disney’s Lake Buena Vista Golf Course that is near Disney Springs. For Father’s Day, Disney’s Oak Trail Golf Course, located by the Palm and Magnolia, is a 9-hole par-36 walking course.

For younger children, Disney has 2 miniature golf course locations each with 36 holes (two courses at each location) to play with Disney’s Fantasia Gardens located across the street from the Swan and Dolphin hotel and the Winter Summerland course located directly next to Blizzard Beach.

There are a lot of other activities at Disney World outside of the theme parks that are a great way to spend Fathers Day including snorkeling with sharks and sting rays at Typhoon Lagoon, driving laps on a race track at the Richard Petty Driving Experience, going Horse Back Riding at Fort Wilderness Campground or Bass Fishing on Disney Property. Another idea is chartering a boat at one of the several marina’s or go for a specialty fireworks cruise. For dinner, there is the ESPN Club at the Boardwalk or the upscale Don Shula’s Steakhouse at the appropriately named Dolphin hotel. At Disney Springs is the AMC Movie Theater, Splittsville Luxury Lanes Bowling, or enjoy Cirque de Soleil’s La Nouba.

Click here for coverage of spending a day at Typhoon Lagoon with a Toddler and click here for our story of a Father and Daughter date night at Disney Springs.

Click Here for our top romantic restaurant recommendations at Disney World for an extra special evening out.