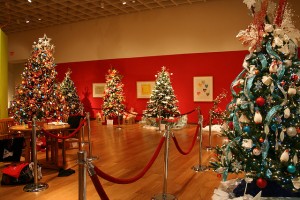 Sometime between 672-754 AD,  Christian lore states that St Boniface of Germany cut down a tree of Thor in order to disprove the legitimacy of the Norse gods to the local German tribe of the time. Spotting a fir tree growing in the roots of an old oak tree, Boniface took this as a sign of the Christian faith, stating “…let Christ be at the center of your households…” using the fir tree as a symbol of Christianity.

Now in its 28th year, the Festival of Trees is an annual event in Orlando that kicks off the Christmas season held at the Orlando Museum of Art that celebrates the tradition of decorating a tree and moving it into ones home. During the festival, Christmas Trees are eloquently designed and decorated from different groups and designers and put on display. There are also Christmas wreaths and other decorations on display and a gingerbread village area. All of the Designer Trees, Deck the Halls items, and Gingerbread Village creations are available for purchase with the proceeds benefiting the Orlando Musuem of Art.

The annual Gala to kick off the Festival of Tree’s will take place on Friday, November 14th, 2014. Tickets for this Black-Tie Optional event have been $125 in years past.

While you are at the museum in Loch Haven Park, take your kids to the adjacent Orlando Repertory Theatre.