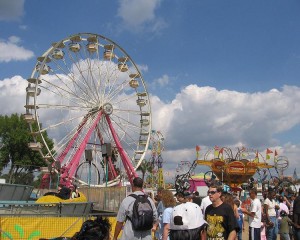 There has been a lot of talk in recent years about sustainable farming and eating locally-grown produce of fruits and vegetables.  Since 1930, there hasn’t been a place where that has been so true than in Plant City and their celebration of the strawberry at the Florida Strawberry Festival.


Every year in March over 500,000 visitors transcend onto the small agricultural city of Plant City, a city about a 45 minute drive from Disney Property southwest along Interstate 4, to celebrate all things around strawberries.

The city may be small but the festival is big, traditionally bringing in the best country acts out there today including country artists Martina McBride, Trace Adkins, Josh Turner, and The Band Perry. The 2016 event marks the 81st year, and will take place beginning on Thursday, March 3rd, 2016 and will run every day until Sunday, March 13th, 2016.

At the core of the festival is a number of events of free entertainment that range from the Florida Strawberry Parade held on the first Monday of the festival, to poultry, lamb, and rabbit shows throughout the festival, and corn dog and strawberry shortcake eating contests.

In addition to the entertainment included with the festival, a large assortment of carnival midway rides are available to ride throughout the festival for an additional cost. The admission price is $8 for adults ($10 at gate) and $4 for children ($5 at gate) ages 6-12 to enter the festival grounds. Children ages 5 and under are free. Promotions on certain days bring the midway price down to different prices that can be found here.

The 2016 headlining acts include:

Click Here for the official headlining concert schedule including additional shows earlier on in the day for certain days.

If you would still like to get a taste of Plant City’s Strawberries but are unable to make it during the annual festival, you can still go to Parkesdale Farms to get your fix of Plant City strawberries and their World Famous Strawberry Shortcake!

The Florida Strawberry Festival takes place during the same time of year as the Central Florida Fair in Orlando.