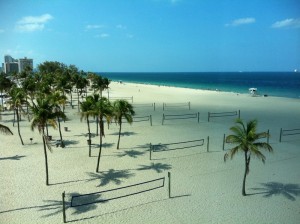 About a little over 3 hours drive south on the Florida Turnpike from Orlando International Airport is Fort Lauderdale Beach, a great weekend getaway for travelers visiting the Orlando area or locals looking to get away for a few days. Orlando Local Guide recently visited Fort Lauderdale Beach.

Fort Lauderdale Beach is one of the nicest beaches on the east coast of Florida with soft brown sand and the clear blue water close to the shore. The surrounding area is more sophisticated than some of Orlando’s closest beaches with a Ritz Carlton, Westin, and W hotel aligning the main strip of A1A. Marriot and Sheraton have their two hotels directly on Fort Lauderdale Beach with swimming areas and beach bars that look out over the ocean. Although the water is clear on the shore of the beach, the waves are almost always calm that is in contrast to the surf-friendly waves that Orlando residents are used to seeing with it’s nearby beaches (ie. Cocoa Beach; Daytona Beach). Like Orlando’s closer beaches, there are many water activities and excursions in Fort Lauderdale Beach including Deep Sea Fishing and Boat rentals.

On the north part of Fort Lauderdale Beach a few miles inward is the Galleria Mall that is anchored by a Macy’s and Neiman Marcus that contains restaurants known in Orlando including The Capital Grille, PF Changs, Seasons 52, and Blue Martini, as well as brands that have not yet entered the market like the seafood establishment Trulucks. In addition to these restaurants, a large number of upscale and cheap eats line A1A of Fort Lauderdale Beach including a Shula’s Steakhouse. On our visit, we were a little adventurous and dined inland at Canyon Southwestern Cafe (think Samba Room in a bistro-type setting) and Valentino’s Cucina Italiana (think an independent more upscale-Brio in a smaller space). Both restaurants get high marks from Orlando Local Guide in the professionalism of the staff and quality of the menu and items served. 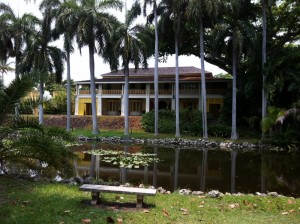 At the north part of Fort Lauderdale Beach lies it’s central park, an oasis of green space retained in a sea of concrete condominiums and hotels, the Bonnet House Museum and Gardens (see video below). When we first researched the museum, we expected it to be Fort Lauderdale’s version of Leu Gardens in Orlando but it turned out to be closer to the Albin Polasek Museum in Winter Park. The Bonnet House belonged to Chicago artist Frederic Clay Bartlett, whose is best known more for his collection of famous paintings owned that he donated to the Art Institute of Chicago in 1926 that included A Sunday on La Grande Jatte—1884. The house and museum is used to tell the story of both Bartlett and his family as well as the history of Fort Lauderdale, Florida.

If you have visited and enjoyed the Polasek Museum in Winter Park, Orlando Local Guide recommends visiting the Bonnet House in Fort Lauderdale and vice-versa as both depict the life and times of an artist living in Florida. The Polasek museum features many more impressive works from the artist himself on display at the museum.

This entry was posted in Places and tagged beaches, garden, museums, weekend getaways. Bookmark the permalink.