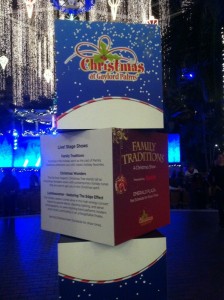 The Gaylord Palms resort has several shows and activities to celebrate the Christmas season in the months of November and December and a highlight of those events is Christmas Caroling in the main atrium of the resort.

The highlight of the caroling shows is the Christmas Tree Light Show called Luminescence that features the a capella musical group the Edge Effect, that has a sound similar to musical acts Boyz II Men or ‘nSYNC, that sing along to a live band where lights are synchronized to the music during certain segments.

At certain times throughout the day during the holidays, four carolers take the stage and sing several traditional Christmas songs for guests of the hotel to sing along with and get into the Christmas spirit. Check out the video below to see a performance of Family Traditions:

At 6:15 pm each night during the season, the Edge Effect puts on a 12 minute a capella show singing familiar holiday tunes with audience participation. The show ends with the lighting of the 54 foot Christmas Tree and the 2 million twinkling lights. Watch the video below:

At either 7:45 pm or 8:45 pm (depending on the day), the Edge Effect performs in concert that contains many of the same songs that were performed during the Tree Lighting ceremony (at least that was the case on the opening night that we attended) that can be viewed below (from a different angle of the Christmas Tree Lighting).

Luminescence is the main event of the night, with two performances on most nights, where the Edge Effect is joined on stage by a band and an acrobatic performer that has a couple of surprises. Midway through and to finish the show, the Christmas Tree and surrounding lights are synchronized to the music that is playing on stage.

Click here to see shorter versions of the videos above that focuses specifically on the lighting of the Christmas Tree and the synchronized lights to music and click here to visit the official website for dates and times of the shows above.

Click here for our guide on spending Christmas at the Gaylord Palms Resort and click here for all things to do around Orlando during the Christmas season.