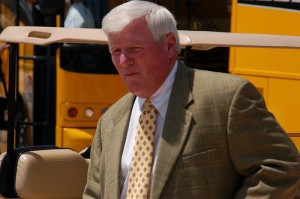 As part of UCF‘s fan-base campaign that came to 310 Lakeside in downtown Orlando called UKnight, my wife and I were lucky enough to meet George O’Leary at the event and share a small table that he was sitting at totally by chance. Being graduates of the University of Central Florida and UCF Football season ticket holders for several years now, we had heard many differentiating opinions about our storied football coach but did not know what to expect when meeting him in a casual environment. What we found with Coach O’Leary was that he was very gracious with offering us seats at the table that he was at, asking us about where we were from and our time at UCF, and making several jokes throughout the event.

Having spent about an hour sitting at the table in casual conversation, I could see the transformation of a coach that can be intense on the field with the players at times into a great recruiter with his charismatic approach and friendly attitude and demeanor that carried on into his presentation to the group that came to see him speak (see video below).

George O’Leary is the current head football coach of the UCF Knights Football Team and has taken a team that struggled for several years just prior to and just after his arrival to the team that it has today that is coming off it’s best year ever during the 2010 season when the team finished ranked in the BCS Top 25 for the first time in the school’s history. The same 2010 squad also won it’s first ever Bowl Game against the Georgia Bulldogs in the Liberty Bowl. Under sophomore quarterback Jeff Godfrey and some of the best recruiting classes in school history, the UCF Knights are being picked as a potential BCS buster in the coming 2011 season.

However, it has not always been smooth sailing at UCF with George O’Leary. During his first year as head coach of the team in 2004, the UCF Knights lost every single game during the season. In the next 5 years that followed, UCF played inconsistently over the span with winning seasons in 2005, 2007, and 2009 but losing seasons in the even number years of 2006 and 2008. Fans and media started questioning whether O’Leary was the right coach to take UCF to the next level and it was common to hear boos in the stadium when video of O’Leary played on the scoreboard. My take, which was not always the popular one was that UCF was always fortunate to have O’Leary as coach and not vice-versa. O’Leary had a very successful career at Georgia Tech and as an assistant coach for the Minnesota Vikings. UCF has always been labeled the next up and coming program, but didn’t have much to show for it. This coming from a fan that has been attending UCF games since the 2004 season when we were lucky to get 6,000 to 7,000 fans at a game. With all of the scrutiny that O’Leary had over his first few years as coach, it makes you wonder if he had ever felt a part of the UCF family or if he was the coach of a team that was of mutual convenience.

Determined to stick it out and take UCF to the next level, O’Leary worked with the UCF administration to build a world-class training facility at the college and also to bring the game changing on-campus stadium for the 2007 season. That year, UCF won the Conference USA championship under future NFL running back Kevin Smith and went to it’s first ever bowl game in the Liberty Bowl.

With a very successful 2010 season completed and high hopes for seasons to come, many UCF fans have finally come to support the great coach that George O’Leary is and are now singing his praises. After meeting Coach George O’Leary, I can now state that he is just a great of a person when it comes to casual conversation and encounters as he is a coach on the football field.

The one item that my wife and I took away from O’Leary’s presentation about the UCF fan base when addressing them about fan support was his use of the word “You”. You guys have the second largest University in the Country. You guys have a great school. You guys need to show up for games of all sports and athletics.

With all the you, you, you’s, it made us circle back around to see if we the fans have taken the steps of making O’Leary know that he is our coach and that he is a part of the UCF family. We much would have rather heard O’Leary state that “We” have the second largest University in the country, and “We” need to get our fans out there. Maybe this was getting back to the relationship of mutual convenience.

As UCF fans, now is the time to let Coach O’Leary know that he is our coach both for the short term and the long term for how ever long he wants to coach the Knights and that he is a part of our UCF Family. The pieces are in place. Let’s go Knights!

This entry was posted in Life and tagged people, sports, ucf. Bookmark the permalink.