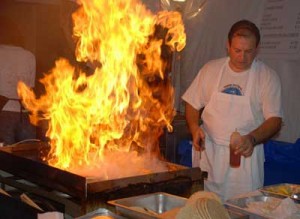 Growing up on the west coast of Florida throughout most of my childhood before I moved to Orlando to attend UCF in 1994, the neighborhood that I lived in was zoned for Tarpon Springs High School in which I spent my formative high school years.

Although not Greek myself, my best friend growing up in Tarpon Springs was Greek and therefore I met and spent a lot of time with members of the tight-knit Greek community there. When many Americans think about the Greek experience in the United States, they think of the different cuisines of a Gyro pita or dinner, stuffed grape leaves, baklava dessert, gypsy Greek belly dancing, or the popular My Big Fat Greek Wedding movie that made it big at the box office a few years ago.

When I attended the Orlando Greek Fest at the Holy Trinity Greek Orthodox Church in Maitland a few years ago, the experience took me back to the time of my childhood that I spent hanging out at the Sponge Docks with my Greek friends at nighttime, celebrating the annual Epiphany celebration on January 6th each year where 50 to 80 Greek boys dive for a white wooden Cross in the bayous of Tarpon Springs, eating rich Greek foods at the Glendi festival afterwards, and being the best man in my friends Greek wedding at the historic and beautiful St Nicholas Greek Orthodox Cathedral in the heart of Tarpon Springs, Florida.

With Tarpon Springs being about a 3 hour drive from Orlando, you can instead get a little glimpse of the Greek culture and lifestyle when the Orlando Greek Fest returns to Orlando on Friday, November 4th, 2016 through Sunday, November 6th, 2016 at Holy Trinity Greek Orthodox Church in Maitland, Florida.

The Orlando Greek Fest is an annual festival that is held each year that celebrates the Greek culture with authentic Greek foods, dancing, live music, church tours, iconography presentations, and more.

Click here to see the full dancing and band schedule for the Greek Fest.

The available Greek items to purchase for the 2016 event includes:

There will also be a Saganaki “Flaming Cheese” booth (see picture above).

Admission to the Orlando Greek Fest is $3/person for ages 12 and older, and $5 for parking. Get $1 off the price of admission if you bring a canned food item for the Ephraim Project.

If you enjoy attending the Orlando Greek Fest, another great similar festival to attend is SerbFest in the month of October in Orlando that celebrates Serbian’s heritage and culture in Longwood. 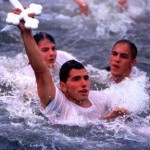 This article is dedicated to one of my best friends, Thomas Dellis (1976-1997), who retrieved the Epiphany Cross in 1995 in Tarpon Springs, Florida.