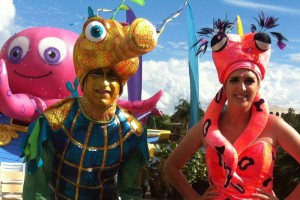 Halloween officially kicks off the holiday season in Orlando when the fall season finally comes around and we great a break in the weather from the high 90’s during the summer down to the mid 70’s and 80’s that makes for very comfortable nights.

Halloween Events for Kids in Orlando

In addition to the main event of trick or treating around Orlando’s neighborhoods, there are several events that can be attended to get some additional use out your child’s Halloween costume including trick-or-treating events at Disney World and SeaWorld.

Once the costume is all set, it is time to take the little ones to some of the Halloween events around the city. The best local event is on Halloween night at Crane’s Roost Park at Uptown Altamonte in Altamonte Springs where over 15,000 local children will trick or treat around the lake. There are costume contests for all ages, inflatable games and live entertainment.

The event kicks off at 5 pm with trick-or-treating around Cranes Roost Lake, and live entertainment in the Eddie Rose Amphitheater.  The costume contests begin at 6 pm in the Amphitheater with the youngest ages on stage first.

The main theme park Halloween event for kids takes place at the Magic Kingdom with Mickey’s Not So Scary Halloween Party that is appropriate for young children that has trick-or-treating, a Halloween parade with the characters dressed up in their Halloween costumes, and Halloween themed fireworks.

Click Here for tips on how best to navigate Mickey’s Halloween Party from the Orlando Sentinel.

In addition to the Magic Kingdom, Animal Kingdom has traditionally had Halloween trick or treating on the day of Halloween and through the holiday weekend with character meet and greet areas included with normal admission that Disney does not typically advertise.

SeaWorld has the other kid-friendly Halloween event called Sea World’s Halloween Spooktacular that is included with theme park admission that features trick or treating and a Sesame Street Halloween Show starring Elmo.