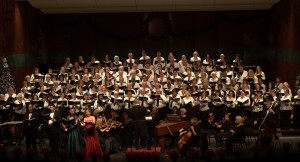 The Messiah Choral Society will be presenting their free annual performance of Handel’s Messiah at the Bob Carr Performing Arts Centre on Sunday, November 29th, 2015 at 3 pm. Doors open at 2:15 pm and admission is free. Considered the most magnificent classical masterwork of all time, Handel’s Messiah features the “Hallelujah Chorus” and a host of other glorious orchestrations, both choral and solo, many of which contain very familiar melodies (see video below).

Born on February 23, 1685, George Frideric Handel demonstrated extraordinary musical talent at an early age. He wrote his first composition at age twelve and was so proficient at the organ that he was able to substitute for his own teacher. At seventeen, he was appointed organist of the Calvinist Cathedral. At nineteen, he composed his first opera, Almira, which was soon followed by a second one named Nero.

Handel turned from opera to oratorio, writing twenty-six in his lifetime. In 1729, the Handelian oratorio on a Biblical subject was firmly established with two works, Saul and Israel in Egypt.

Changing monarchs, English competition, and fickle audiences took its toll on Handel. By 1741, he was deeply in debt and his health failed. He seemed certain to land in debtor’s prison. However, it was then that a wealthy friend, Charles Jennens, commissioned Handel to create a libretto based on the life of Christ.

Handel began composing on August 22nd. He grew so absorbed that he rarely left his room, hardly stopping to eat. When he had finished, he had written 260 pages of manuscript in only twenty-four days. The title he chose was simply Messiah.

Messiah premiered in Dublin on April 23, 1742, as a charitable benefit, raising 400 pounds and freeing 142 men from debtor’s prison. The following year, Handel staged it in London with the King of England in attendance. As the first notes of the Hallelujah Chorus rang out, for some unknown but fortuitous reason the king stood to his feet. Following royal protocol, the audience stood as well, initiating a tradition that has lasted for more than two centuries.

Handel personally conducted over thirty performances of Messiah; many were benefits for the Foundling Hospital. The thousands of pounds that Handel’s performance of Messiah raised for charity led one biographer to note: “Messiah has fed the hungry, clothed the naked, fostered the orphan…more than any other single musical production in this or any country.”

On April 14, 1759, just eight days after his final performance of Messiah, George Frideric Handel died. He was buried in Westminster Abbey. A statue erected there in his honor shows him holding the manuscript for the opening solo of Part III of Messiah – I know that my Redeemer liveth.