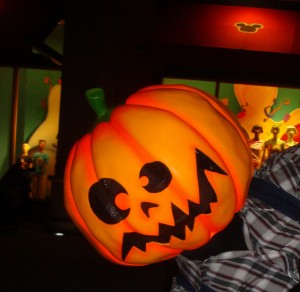 Up until 2011, Downtown Disney hosted a free Halloween Event called Happy Haunting that has now been cancelled. You can still celebrate halloween at Disney with their seperate ticketed event Mickey’s Not-So-Scary Halloween Party at the Magic Kingdom.

For free Halloween trick-or-treating, Orlando Local Guide recommends Uptown Altamonte in Altamonte Springs. Below is our original story for when Happy Haunting was still taking place at Downtown Disney.

Trick or Treating at Downtown Disney

During the Halloween event, children have been able to walk the one-mile trail of free sweets and entertainment from 5:00pm to 9:00 PM at Downtown Disney on October 30th and 31st. Treat bags for collecting candy at the roughly 20 stations along the route will be distributed, as well as maps of the available treat locations (see map below).

Halloween performers in jack-o-lantern masks (see picture above) and Halloween DJ’s on stage provide the music to help with the Halloween festivities. There are also several Halloween displays for some great photo opportunities. A must-stop along the 2010 trick or treating route was at Ghirardelli, the second oldest chocolate company in the United States, that added a special chocolate treat in addition to the candy provided at the other stops.

Happy Haunting is a great free Halloween event in Orlando and gets packed on both days with people everywhere. During the 2010 event, traffic backed up and down I-4 and many guests may have never made it to the event. If you are not staying on property, we recommend parking at Downtown Disney in the morning and finding something to do around the resort the rest of the day so that you can easily get back to Downtown Disney later on when the event begins. Go miniature golfing at one of Disney’s two miniature golf courses, catch a movie or two at the AMC theater, grab a bite to eat at one of the restaurants in Downtown Disney, or take in some shopping at Downtown Disney. During the event, you will be busy going from station to station to get candy.