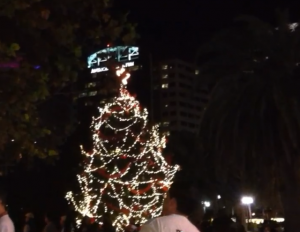 The City of Orlando’s Christmas Tree will officially be lit on Friday, December 4th, 2015 at the Disney Amphitheater at Lake Eola in Downtown Orlando during a Christmas event that begins at 5 PM.

Holiday Lights Orlando and The Gift

The lighting of the Christmas Tree will again be accompanied by the Trinity Evangelical Church that will be presenting a Christmas Show entitled The Gift during the event that will feature a choir of up to 100 individuals that will help the city celebrate the true meaning of the Christmas season with the birth of our Lord and Savior, Jesus Christ, who is the greatest gift of all.

Highlights of the evening will include Mayor Buddy Dyer lighting Orlando’s official Christmas tree. Festivities will also include the lighting of a menorah, a sampling of holiday treats and an outdoor viewing of How the Grinch Stole Christmas.

The Gift includes the performance of a massed choir that has been conducted by Composer/Conductor Emeritus of the Walt Disney World Candlelight Procession, Derric Johnson in years past along with WESH-Channel 2 news anchor Jim Payne narrating.

The Festival begins with traditional sidewalk foods and Christmas goodies all around the park along Rosalind Avenue with streetmosphere entertainers performing throughout the festival including traditional Christmas hand-bell choirs, Gospel choirs, soloists, and vocal quartets. The Trinity Lutheran School children present a traditional children’s Christmas play on stage with the production ending with a massed choir on stage joined by the audience singing “Silent Night, Holy Night.”

Food Trucks will also be on hand from TheDailyCity.com Food Truck Bazaar

Similar events to The Gift to celebrate the season include The Singing Christmas Trees and the Epcot Candlelight Processional.

Click Here to read our official guide of the best holiday events going on in Downtown Orlando during the Christmas season and click here for great Christmas events  and things to do all around the Orlando area including the attractions.