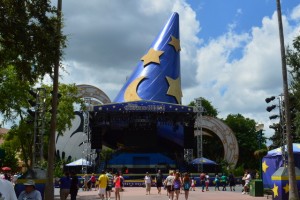 There is a new character dance party at Disney’s Hollywood Studios that runs from 4:30 pm until 8:30 pm that features many classic characters and ones not often seen at the parks that dance with guests in front of Mickey’s Sorcerer’s Hat called the Hollywood Character Dance Jam.

At the time that we experienced the dance jam event, there was a character shift change taking place where we saw Minnie Mouse, Jafar, the Queen of Hearts, and Bolt make way for Pluto, Chip, Dale, Tigger, Eeyore, Rafiki, and Meeko (see video below). Looking over a cast members shoulder, it appeared that there would be different characters dancing throughout the 4-hour window.

With the new dance party, Disney is taking a popular experience that has taken place over the years on their cruise ships to Disney’s Hollywood Studios at Walt Disney World.

This entry was posted in Attractions and tagged disney world, hollywood studios. Bookmark the permalink.