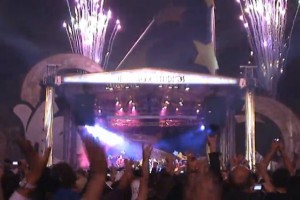 For the last few years, Hollywood Studios has utilized their house band called Mulch, Sweat, and Sheers to provide the soundtrack to what is Orlando’s most lively New Years Eve Fireworks show called Lights! Camera, Happy New Year! that will take place at the center of the park to countdown the new year with Fireworks at midnight.

With the Magic Kingdom providing a more traditional fireworks show on New Years Eve and Epcot sending as much fireworks in the round as much as possible to overwhelm you, Hollywood Studios turns the New Years Eve celebration into a rock concert with the choruses of such songs as Live and Let Die, Let It Be, Lonely, Dream On, Taking Care of Business, Big Shot, and Teenage Wasteland.

While you are at Hollywood Studios, be sure to check out the Osborne Christmas Lights as well as one of the three shows of Fantasmic!