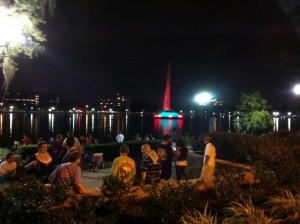 Each night, the Lake Eola Fountain in Downtown Orlando does it’s best impression of the Bellagio Fountains in Las Vegas as it comes alive with a choreographed musical show set to classical jazz and disco for a 4 and half minute performance at 8 pm and again at 9:30 pm.

Okay, before we get too ahead of ourselves, this is not anything like the Bellagio Fountains in Las Vegas but it fits right in with the makeup of Downtown Orlando and the history of Lake Eola Park. The fountain was refurbished after being down for several months from a lightning strike and features a new exterior frame, plexiglas skin, led lighting, pumps, piping, electrical controls and spray jets. Additional colored lights were also added to the original fountain’s upper and lower rings. Taking a page from Epcot at Disney World, the fountain plays music that can be heard from the speakers around the park. Music softly plays from the speakers during the day as well.

Click Here to read more about Lake Eola Park and the annual events held at the park.