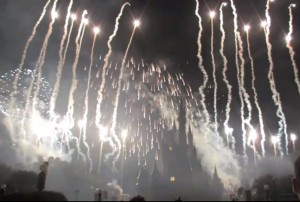 Each year on special-event nights during the months of September and October, Disney World hosts a separate ticket event to celebrate Halloween at the Magic Kingdom called Mickey’s Not So Scary Halloween Party. One of the major highlights of the Halloween event is the Hallowishes Firework Show that fills the sky with Orange and White fireworks behind Cinderella Castle.

Hallowishes is a musical medley of fireworks bookmarked with sounds and music from the Magic Kingdom’s Haunted Mansion ride that also contains voices and songs from some of Disney’s most hated and loved villians including Ursula from the Little Mermaid, Jafar from Alladin, and Cruella Deville from 101 Dalmations. The Little Mermaids “You Poor Unfortunate Souls” and The Nightmare Before Christmas “This is Halloween” are prominently featured throughout the show. Also included is the “Heffalumps and Woozles” song that is also heard on the Winnie the Pooh ride at the Magic Kingdom that has a Willy Wonka rhythm to it.

Unique to the Halloween Firework show at the Magic Kingdom compared to other shows is that the lights on the castle are dimmed real low for several seconds as the Grand Finale of fireworks takes over the skies. Hallowishes is the only Halloween-themed firework show in Orlando.