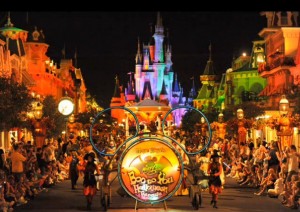 The parade, part of the Halloween Party separate-ticket event, starts off with the Headless Horseman on horseback with a jack-o-lantern in hand. The official parade then kicks off with classic characters Dopey and Snow White from Snow White and the Seven Dwarfs, Pinocchio and Gepetto, Aladdin and Princess Jasmine, Twittle Dee and Twittle Dum with Alice and the original Mad Hatter. The first float comes as Mickey Mouse and Minnie Mouse wave to the parade watchers with Donald Duck and Daisy Duck. The next lineup stars the hundred-acre woods characters Winnie the Pooh, Piglet, Tigger, Eeyore, Rabbit, Kanga, and Roo that are all dressed up for Halloween.

As Happy Halloween music plays, Peter Pan, Wendy, Captain Hook, Smee, and the Lost Boys play while the parade music mixes in with the Pirates of the Caribbean theme of Pirates Life for Me. Next comes Jack Sparrow and his pirates friends. The Haunted Mansion float highlights the parade with grave digging dancers with hitch-hiking ghosts in black lights. After the Country Bears switch the style over to a western theme, the Song of the South characters sing and dance.  A villians float stars such characters as Jafar, the Queen of Hearts, Big Bad Wolf, Maleficent, and the Lion King Hyenas. The parade ends with Pluto and Goofy handing out candy with Goofys Candy Company.