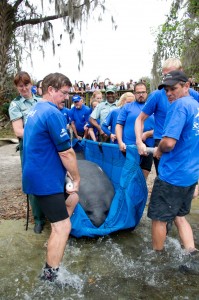 On February 6th, 2013, SeaWorld Orlando’s Animal Rescue Team transported “Slip” the Manatee from it’s park in Orlando to Blue Spring State Park in Orange City, Florida in the northern part of Orlando. After being rescued by SeaWorld’s team on January 4th, 2012 in Palatka, Florida, “Slip” was able to join his fellow Manatee’s that make an annual trip to Blue Spring State Park each year during the winter to be released back into the wild.

SeaWorld Orlando features rescued Manatee’s in it’s brand-new Turtle Trek attraction that opened in 2012 that features a wide-live view of manatee’s swimming around during the pre-show area of the attraction and then with the three-dimensional computer generated manatee’s that swim around you in the main theatrical attraction.

Outside of the entertainment value of watching a live or animated manatee on display at the sea-life park, it is sometimes easy to forget that there is a major conservation mission going on that SeaWorld manages where SeaWorld animal experts have helped more than 22,000 animals in need over the last four decades.

In addition to SeaWorld, Disney’s Epcot normally has one or two Manatee’s on display at The Sea’s With Nemo & Friends attraction.

Watch the manatee’s at the Turtle Trek pre-show in the video below:

If SeaWorld is the best place to watch manatee’s at Orlando’s theme parks, Blue Spring State Park is the best place for manatee watching at one of Orlando’s regional parks. During the winter months between mid-November and mid-March, over a hundred manatee’s (and possibly over 300 at times) will migrate to the park each year to escape the cold waters of the St John’s River and rest in the warm springs of the park. It was for this reason that SeaWorld choose to release “Slip” the manatee at this location.

Covering over 2,600 acres, Blue Spring State Park has a nice-size boardwalk that allows you to walk along and view the manatee’s from several different angles. The spring temperature stays around 73 degree’s throughout the year and can be enjoyed by swimmers, snorkelers, and certified scuba divers when the manatee’s are gone from mid-March through mid-November.

The St John’s River is popular for fishing, canoeing, and boating with river boat tours available by reservation with St. Johns River Cruises at (386) 917-0724.

View Manatees in Orlando in a larger map