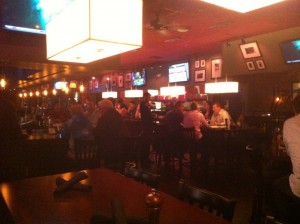 If you are looking for a restaurant that serves fried green tomatoes in the city of Orlando along with other great southern-inspired cuisines, then look no futher than Marlow’s Tavern at Pointe Orlando on International Drive (with several other Orlando locations planned) that serves up the fried green tomatoes along with jalapeno corn grits and other southern specialties. Marlow’s Tavern at Pointe Orlando brings a little bit of Atlanta and it’s southern cuisine to the city of Orlando.

We were recently invited out for a meal provided by Marlow’s Tavern at their first restaurant opening outside of Atlanta, Georgia at Pointe Orlando on International Drive. Prior to our visit, we went in thinking that the atmosphere and cuisine at Marlow’s Tavern would be similar in nature to the Ravenous Pig in Winter Park or the Rusty Spoon in Downtown Orlando. While the atmosphere and surroundings of Marlow’s Tavern is similar to the restaurants mentioned above, what we really enjoyed was the mix of southern-style prepared sides and appetizers mixed in with fresh and quality entrees and sandwiches. You no longer have to resort to the Cracker Barrel for good southern cooking Orlando. It’s all right here at Marlow’s Tavern.

Although there are no markings anywhere around the restaurant about Marlow’s being a gastropub, that is exactly the type of experience that you are getting here with a cozy brick-wall tavern and bar atmosphere with a great attention and detail to the food that is prepared. There are a great selection of wines available to start your meal with along with several craft beers. I opted for the locally brewed Orange Blossom Pilsner.

For the appetizer, we started off with the Burrata Mozzarella & Fried Green Tomato that we highly recommend and was a favorite dish of the night (see video below). The last time I had Fried Green Tomatoes was over 12 years ago when I was waiting tables at Cooker Bar and Grille that used to have a location in Altamonte Springs (now a WingHouse) and East Colonial (now a Houlihan’s). The fried green tomatoes at Cooker were good but I like the ones at Marlow’s Tavern better and the Burrata Mozzarella with balsamic vinegar on top completed the meal.

For dinner, we had the Grilled “Center Cut” Filet and the Prime Rib French Dip. The filet was excellent and prepared in a way that we were able to cut through it with our forks and butter knives. It was accompanied with a delicious crispy wild mushroom potato cake, baby broccolini, garlic tomato fondue, and crumbled gorgonzola.

The french dip was excellent as well and is made with swiss cheese, caramelized onions, and mayonnaise. We requested horseradish sauce on the side that the kitchen was able to make for us. As a side, we choose the jalepeno corn grits (see video below).

We finished off the night with the Crème brûlée that was just as good as any other we’ve had at other restaurants and a Warm Chocolate Tollhouse Pie that was made with chocolate and a salty pretzel placed in an Oreo crust with vanilla ice cream and chocolate sauce.

Dinner and a Movie, Comedy, Concert, or Show

Marlow’s Tavern is in a great location for a date night out in Orlando as there are several options all within the same complex of Pointe Orlando to combine with your meal with the Regal Theatres with Imax movie theaters, the Improv Comedy Club (that frequently has Saturday Night Live alumni performing), and BB Kings Blues club that has live entertainment on a nightly basis. On the night of our visit, Marlow’s Tavern also had live music on the patio but unfortunately the temperature happened to be in the high 40’s so most guest opted to stay inside.

During our visit at Marlow’s Tavern, the staff members and managers told us that the Pointe Orlando location is just the beginning to an aggressive planned expansion all around the Orlando area. Although the first Marlow’s Tavern is in the touristy-location of International Drive, all of the existing locations in Atlanta are all located in neighborhood hangouts. The plan for Orlando is to do the same with planned expansions to Winter Park (on 17/92 near the Einstein Bagels), Thornton Park, Waterford Lakes (in the Toys ‘R Us Parking Lot), Windermere, Celebration, and more.

We have to say that we believe that Marlow’s Tavern will fit in just fine in these new locations around Orlando and will immediately elevate the dining scene at Waterford Lakes with their location there.

Marlow’s Tavern is celebrating the 2012 opening of their Pointe Orlando restaurant with a week full of grand opening celebrations that will include live music on the patio on most nights starting at 7 pm:

Monday, November 12: Power Lunch with Second Harvest Food Bank – Marlow’s will donate 20% of your check to benefit SHFBCF (between 11 a.m. and 4 p.m.).

Proceeds will be added to the pre-opening contributions, totaling more than $6,000 that provides up to $56,000 in food value for struggling individuals and families in this community.