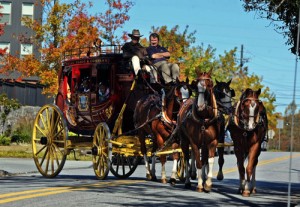 Memorial Day is the day of the year that Americans pay their respects for the American soldiers that have paid the ultimate sacrifice of their lives to provide us with the rights and liberties that we so often take for granted.

You only need to turn on the news on any given day to see the suppression and turmoil going on in other parts of the world to really help you appreciate just how great we have it. First created to honor the Union and Confederate soldiers that lost their lives in the Civil War, Memorial Day is now recognized as an official holiday to recognize soldiers that have died in all American wars.

The best way to celebrate Memorial Day is at the Sanford Memorial Day Parade and Remembrance Ceremony on Monday, May 25th, 2015. The 2015 parade will begin at 10 AM and will honor our military with parade floats and ceremonies. The 2012 event included the Wells Fargo horse drawn stage coach (see picture above), members of the Tuskegee Airmen, a helicopter flyover, and the Shriners with their full contingent of vehicles and antics. The parade route is in historic downtown Sanford along 1st street (see video and map below).

The American Adventure at Epcot

Another great way to celebrate Memorial Day is to go see the American Adventure audio-animatronic show at Epcot in Disney World that tells the American story with a poignant moment when a family is driven apart by the Civil War. While you are at the American Adventure, stay to watch and listen to the Voices of Liberty A Capella group that sing classic American tunes.

In addition to the Memorial Day events, click here to see other annual events going on around Orlando during Memorial Day weekend including Star Wars Weekends at Hollywood Studios, the Epcot Flower and Garden Festival, and the Orlando Fringe Festival.

Orlando Local Guide is very proud of American service men and women and salutes our military this Memorial Day.