Mickey’s Very Merry Christmas Party at the Magic Kingdom Celebrates the Holidays with Characters, Parades, and Fireworks in 2015 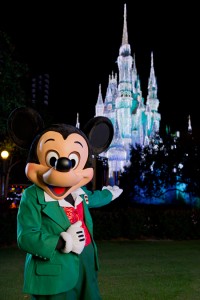 Mickey’s Very Merry Christmas Party is a separate event held outside of normal park hours that officially gets started at 7 pm but guests attending the event can start entering the park at 4 pm. In addition to all of the Christmas shows and parades, many of the parks major attractions are open with shorter lines than a typical day at the park.

A Christmas mini-show not to be missed that can be seen my both normal visitors to the park and early arrivals to the Christmas Party is the lighting ceremony of the Castle Lights at 6:15 pm and 8 pm that features over 200,000 sparkling lights that you can find out about here that features Anna, Elsa, and Olaf from Disney’s Frozen.

In addition to all of the holiday decorations around the Magic Kingdom Park, Disney helps to immerse yourself into the Holiday Season with Florida’s version of snow on Main Street USA throughout the night with complimentary hot cocoa and cookies at several restaurants all throughout the park.

There are also a lot of options of interactions with Disney characters throughout the park with meet and greats and character dance parties including Woody’s Hootin’ Holiday Open House at The Diamond Horseshoe in Libery Square and Club Tinsel at Cosmic Ray’s Starlight Cafe in Tomorrowland.

During Mickey’s Christmas Party, some of the biggest attractions at the Magic Kingdom are open with much shorter lines than on a typical day at the park including Space Mountain, Splash Mountain, Big Thunder Mountain Railroad, and The Haunted Mansion.

Below is the complete list of rides available for the 2015 event:

Mickey’s Very Merry Christmas Party will be held on the following nights from 7 pm until 12 am (with admission starting at 4 pm) in 2015:

Pricing for the event is on a scale with many of the weekday prices a little bit cheaper than the events held on Fridays and on the final two nights of the event and also depending on whether the tickets are purchased in advance or at the gate.

Mickey’s Christmas Party will have many nights that sell out so it is advantageous to purchase your tickets once you have your dates lined up.