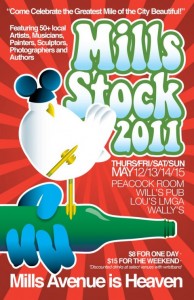 Wally’s Mills Avenue Liquors has been serving Orlando it’s liquor and spirits in the same location since 1954 and is an Orlando institution. Will’s Pub recently relocated to it’s new location across the street from Wally’s after it had already become one of the most respected indie rock venues in the state of Florida when it opened in 1995. Together, along with another group of bars calling themselves the Mills 50 District are re-establishing one of the oldest parts of the city of Orlando that is a few miles off of the current city center. On Thursday, May 12, 2011 through Sunday, May 15, 2011, the Mills 50 district will be putting on the inaugural Mills Stock musical event.

Mills Stock is a new annual event that will feature over 50 local artists, musicians, painters, sculptors, photographers, and authors. Will’s Pub and Wally’s will be joined with the Peacock Room, Lou’s LGMA, and The Vault as venues for the event that will feature such acts as a David Bowie cover band on Thursday night and some of the best local indie bands performing throughout the rest of the weekend. The costs for the event is $8 a day or $15 for the entire weekend. Check out the schedule below: 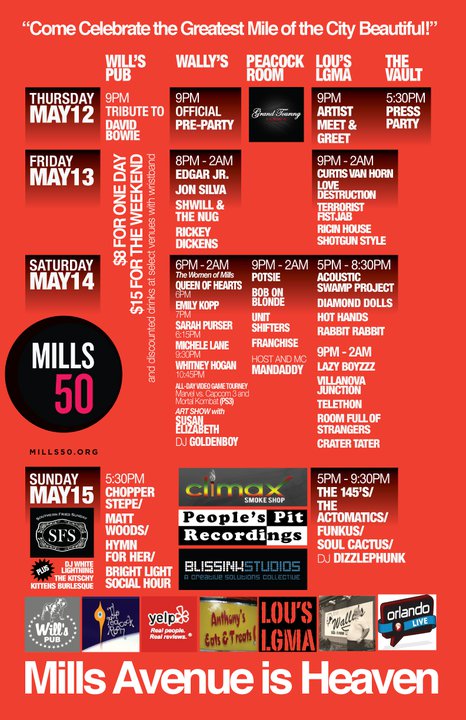 View Mills 50 in a larger map

This entry was posted in News and tagged bars, mills 50, orlando. Bookmark the permalink.