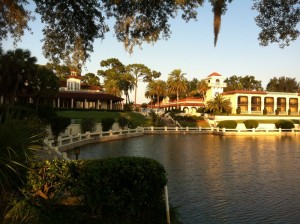 The nickname for the State of Florida is “The Sunshine State”. Another unofficial description for the state could be “The Flat State” because of the lack of elevation in the landscape around Florida. However, the more you move from either coast to the central part of the state, the more you might start to feel that you aren’t in Florida anymore. Mission Inn Resort and Club in the city of Howey-in-the-Hills, Florida provides a great weekend getaway in the hills of Florida that is a nice alternative to the more common Florida resorts on the coast.

The state of Florida was originally built on the industry of oranges and grapefruits by the likes of citrus magnates Dr (Philip) Phillips and William John Howey. At the height of the citrus boom, Phillips, who has a well-known suburb in Orlando named after him, owned 5,000 acres of citrus groves whereas Howey owned 60,000 acres. In 1925, the unincorporated part of Florida that Howey was living in became incorporated and named after him as Howey-in-the-Hills, Florida

In 1917, Howey opened up the Bougainvillea Hotel that would later become the site of Mission Inn Resort and Club and the El Campéon golf course to host and lure potential citrus investors. Unfortunately for Howey, the Florida land boom collapse in 1926 along with the stock market collapse in 1929 wiped out all of his wealth. After laying dormant for many years, Nick Beucher responded to an ad in the Wall Street Journal in 1964 and bought the property and turned it into what is now an expanding resort that hosts weddings and corporate events on a weekly basis, has two championship golf courses, a spa, tennis courts, skeet shooting, and a marina on Lake Harris. The Beucher family continues to own the Mission Inn Resort and Club as they continue to make improvements and expansions over time. 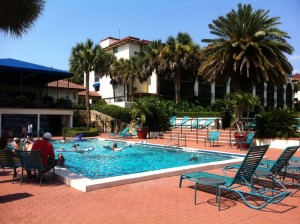 Mission Inn Resort and Club is a great place for a weekend getaway from Orlando. About a 45 minute drive from Downtown Orlando, Mission Inn has more than a weekends amount of activities that can take up your time for a nice and relaxing weekend. Before completely driving out to Mission Inn on a Friday afternoon, we stopped in Winter Garden and had lunch at Orlando’s best barbecue restaurant in 4 Rivers Smokehouse. From there, the drive to Mission Inn was only about 20 minutes. After getting settled into our room, we went down to the swimming pool and did some swimming and relaxing. At night, we ordered room service and then drove about 11 miles to the AMC movie theater in Leesburg to watch one of this years summer blockbusters in 3D. 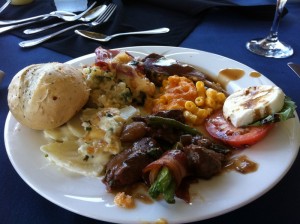 On Saturday morning, we dined al fresca at the La Hacienda restaurant for breakfast looking out over the 17th hole of the El Campéon golf course.  La Hacienda served a breakfast buffet with an omelet and pancake station to order along with traditonal breakfast items of sausage, bacon, biscuits and gravy, fresh fruit, and oatmeal.

On Sunday mornings, La Hacienda has a very popular champagne brunch that had some delicious items such as beef tip filet’s, a chicken and corn-beef dish, prime rib, lamb chops, scalloped potatoes, macaroni and cheese, breads from the Yalaha bakery, and several desert items including a delicious bread pudding and banana fosters (see picture above). Whether you go for their Sunday champagne brunch or just an everyday buffet breakfast, La Hacienda has to be one of the best breakfast restaurants in Lake County.

Over at the clubhouse is Mission Inn’s Nicker’s restaurant that has a Saturday Night buffet of Prime Rib, Crab Legs, and Sushi. Similar to the Sunday brunch, there are many dessert items including the bread pudding, banana fosters, and ice cream. 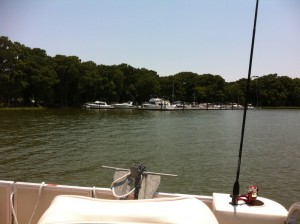 On Saturday morning after eating breakfast at La Hacienda, my family and I headed over to the Marina del Ray Marina to rent a pontoon boat to go boating and fishing out on Lake Harris. Lake Harris has a couple of islands to drive around and several restaurants that have docks that you can pull up to for a bite to eat.

Click here to read more about our experiences and renting a boat at Marina del Ray.

Later on in the day, my wife had a late-afternoon appointment at Spa Marbella for a massage while I watched the kids. Spa Marbella is one of Mission Inn’s most recent additions opening in 2008 and is a full-service spa that provides services including European and couples massage, Thai treatments, facials, nails, and airbrush tanning.

Click here to read more about our experiences at Spa Marbella.

On Sunday morning, I teed off at the El Campéon golf course originally built by Howey in 1917 that is ranked by Zagat, along with Mission Inn’s Las Colinas course, as one of America’s Top Golf Courses (2007-2008). I’ve played many golf courses around the State of Florida and what differentiates El Campéon’s golf course from all of the courses I’ve played is all of the elevations you don’t normally get on a typical Florida course. Thinking back to that this course was originally opened in 1917 before the invention of the golf cart, I can only imagine the workout it must have been for the real-estate and citrus investors walking up and down the hill back when the course first opened. 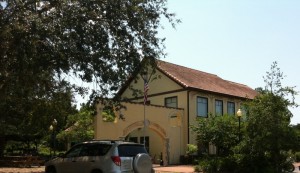 To conclude our weekend getaway experience at Mission Inn, we first have to commend the professional and courteous nature of the staff that work there. Mission Inn is still a family-owned business being ran by the Beucher family and many of the staff that we met indicated the sense of pride that they have working there. After a full weekend of activities concluded, we still feel that there is so much more to see that we didn’t get a chance to do including the original Yalaha Bakery(see picture above) in Yalaha, Florida (a few minutes from Mission Inn) that has live music on the weekends and provides the German breads, cakes, and pastries for it’s second location at Lake Ivanhoe in Downtown Orlando. Right next to the bakery is the adjoining blueberry farm where you can go and pick fresh blueberries with your family. 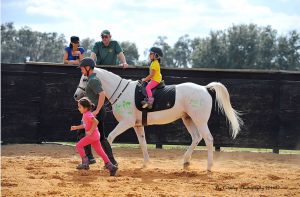 Other activities that we didn’t get to do on this trip that are also available include the Lakeridge Winery and Vineyards and the boat tours of the Dora Canal. With it’s proximity to nearby Mount Dora, Mission Inn Resort and Club is a great place to stay when visiting Mount Dora when they are having their annual art festival that is held each year in the first week of February or their annual antique festival that is held in March. Another great attraction in nearby Clermont is horseback riding and farm tour at Al-Marah Arabians that you can find out about here (see photo above).

Back at the resort, we didn’t get a chance to experience their fine dining El Conquistador restaurant or walk their “Trails of the Conquistadors” nature walk that we would have liked to do. Mission Inn also has the Gary Gilchrist Golf Academy and Cesar Villarroel Tennis Academy on property for individuals wanting to work on their golf or tennis game.

Click here to visit the official website for Mission Inn Resort and Club for more information about the resort.