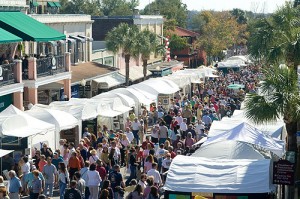 © The Mount Dora Center for the Arts

About a 50 minute drive Northwest of Downtown Orlando sits a bedroom community by the name of Mount Dora that has one of the state of Florida’s largest art festivals during the first weekend of February each year.

The historical district of Mount Dora is one of the nicest quaint cities within the Central Florida area and is competitive with the historical section of Winter Park in character. Sitting on the banks of Lake Dora in Lake County, the city is filled with bed and breakfast hotels and antique shops. Whereas the city is pretty quiet throughout the rest of the year, the Mount Dora Arts Festival is the best weekend of the year to visit Mount Dora but also during the time when it is the most crowded.

Normally held during the same weekend as the Super Bowl, the Mount Dora Arts Festival will take place on Saturday, February 6th, 2016 and Sunday, February 7th, 2016 from 10 AM – 5 PM. With over 300,000 people expected to attend the event over the two days, it is highly recommended that you arrive in Mount Dora as early as possible as parking can be a real challenge throughout the day. There will be the traditional festival food vendors setup for the festival but there is also a great selection of local dining choices to eat at as well around the festival.

If you are looking to make a weekend out of the art festival, we recommend staying at the Mission Inn Resort and Club at nearby Howey-in-the-Hills, Florida.